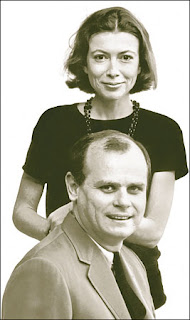 I've got such an old lady girl crush on Joan Didion.  She's 74 now and still so fiercely her own.
Shambhala Sun interviewed Didion last year shortly after The Year of Magical Thinking (her memoir of the loss of her husband and daughter) came out.  The piece hits on that triad of Buddhist themes: impermanence, nonself, and suffering, arguing that Didion "learned in her bones the basic truths we so often deny—death, impermanence, and aloneness."
I know I've mentioned Magical Thinking before, and Didion's long and impressive career encompasses so much more than just that book.  David Swick profiles a woman whose "sharp textual analysis" and "spartan perspective," rooted in geology and Episcopalianism, speak to meaninglessness and emptiness, control and letting go, our cultural denial of death and grief's widespread invisibility.
Worth a read, for another glimpse at this serious and smart California-bred writer.
The Zen of Joan Didion (Shambhala Sun)
Labels: buddhism literary brilliance sexy intellectuals sorrow writing