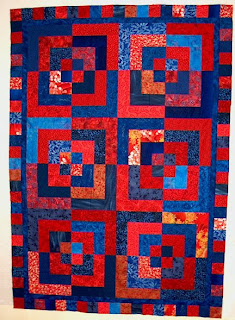 So at this point, let's just be honest: I'm totally obsessed with this election.  And for the next eight days, I don't expect that to change.  It's all Slate, NY Times, HuffPost, all the time.  Rereading the same quotations packaged differently in different articles.  Watching the same bad Fred Armisen Obama impressions.  Cringing as Elisabeth Hasselbeck stumps for Sarah Palin in the pretense that she's anything approximating progress.
But there is, ostensibly, an end in sight.  Even if that means the next week or so might look a lot like this morning, which was several hours' sprawling on my kitchen floor in my pajamas eating a burrito and drinking coffee and reading Salon on McCain.
There are worse ways one could spend a Monday morning.
One of the first things I learned studying social theory is to distrust binaries.  Red/blue, black/white, gay/straight, right/wrong.  To trust the grey areas.  To recognize that they're often dense with wisdom.  And to realize what a farce it is to try to compartmentalize the world into easily opposable categories.
So this nonstop talk of red state/blue state is kind of grating on me.  Kind of reaching a breaking point.  But at the same time, it can be a useful metaphor for making sense of some basic trends.  The New Yorker wrapped a piece on teen sexuality around the whole red state/blue state evangelical divide.  And it's thought-provoking, especially for those of us who remain surprised at the reactions from the anti-sex Right regarding Bristol Palin's teen pregnancy.
The article parses the reality of teen sexual behavior from the supposed image of abstinence projected by the Religious Right, and takes into account the marital success of red state vs. blue state patterns in considering which is really more stabilizing as a social unit:

"...[Researchers] Cahn and Carbone conclude, 'the paradigmatic red-state couple enters marriage not long after the woman becomes sexually active, has two children by her mid-twenties, and reaches the critical period of marriage at the high point in the life cycle for risk-taking and experimentation. The paradigmatic blue-state couple is more likely to experiment with multiple partners, postpone marriage until after they reach emotional and financial maturity, and have their children (if they have them at all) as their lives are stabilizing.'"

Skim through the statistics and dig a little more deeply into what they're saying about the failures of abstinence-only sex education as related to religion. It's just not sustainable. No longer relevant. And completely out of touch.