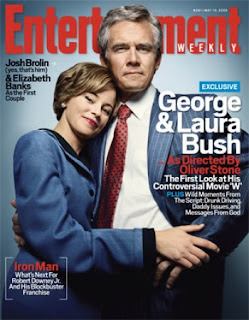 Saw this the other night.
Josh Brolin is so spot-on.  His mugging is frighteningly accurate.  Though I'll admit there were a few disturbing moments in his portrayal of Dubya the frat boy when I tried to counter the realization that Dubya (er, Brolin) was really hot.
Not much to say in terms of plot - you all know the story, past and present.  But I will say, there's something to be said for seeing the iconic aspects of Dubya's history enacted: the drinking, the aimlessness, the born-again conversion.  And the portrayals of Dubya's inner circle - Cheney, Rice, Powell, etc. - are entertaining beyond the SNL-style impression level.  Thandie Newton as Rice is serious Halloween material.  The crowd was laughing at her painfully clenched and twitchy portrayal.  But that's only because it was so creepily accurate.
Certainly not as rough-edged or as scandalous as I'd expected, especially given that Oliver Stone rushed to get this film out before the election.  But it's worth a few hours.  Stone manages to work in some of Bush's more egregious verbal flubs, and between those and the impish Karl Rove running around after him, it's plenty laughable, in a painful kind of way.
James Cromwell is getting good buzz as the thoughtful and aloof elder Bush, and Elizabeth Banks makes for a lovely, albeit secondary, Laura.  But it's Brolin all the way, in terms of carrying the film.  He's really very good.
Labels: cinema politics

Anonymous said…
perhaps we resist change because it is so hard, and it is hard. perhaps it's our resisting that makes it so hard.

on another note, i was reminded of the Nietzsche quote, "love is more afraid of change than destruction."