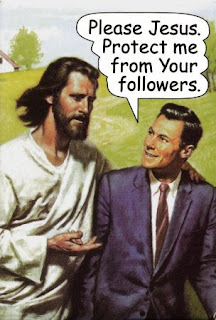 I am rapidly losing patience.
Not only do we have Sarah Palin tossing out her "bless their hearts" in debates and invoking the End Times in regard to global warming (on the latest SNL skit, sure, but c'mon, it might as well be coming from her mouth instead of Tina Fey's), but we've got a nation of fundamentalist "Joe Six-Packs" nodding their heads in agreement as both Palin and Biden argue against equal civil rights under the Constitution on the most-watched television event of the season.
I'm SO. SICK. of this religious right crap.  And I fear, so deeply, that the election that is now less than a month away will remain perilously close because of these supposed God-issues in spite of the fact that the Republican VP candidate still seems fairly incapable of stringing together a coherent sentence not reliant upon talking points or the word "maverick."
ARGHH.  So check what this latest tussle from the religious right looks like.  Some backwards parents in bumfuck New York are challenging the teaching of yoga in schools because they're afraid of the "Hindu doctrinization" going on.  WTF.  This christofascist crap has hit the limit.  Seriously.  I'm over it.  Blood boiling.  Moving to Canada.
Yoga at School Causes Stress Among Some (MSNBC)
Labels: bad religion christofascism national paranoia red states shoot me in the face yoga

Jess(ica) said…
I'm with you. I drove past a lot of people on one of the main thoroughfares here in Memphis on Sunday carrying signs that read, "Abortion Kills Children" and "Lord, forgive us and our country."

I thought the last sign was particularly apt, given that "our country" has killed hundreds of thousands of Iraqis in the last 6 years. But I'm guessing that is not what the sign holder was referring to.
October 6, 2008 at 7:39:00 AM PDT