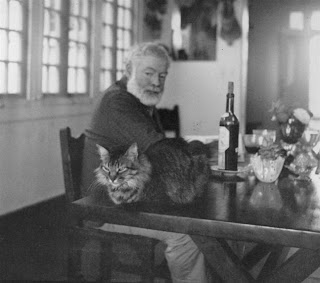 The NYT Fashion & Style section was full of particularly craptastic puff pieces over the weekend.  Not only can you catch up on your most superficial understandings of polyamory amongst the metropolitan 30ish set, but you can study up on what it looks like when you tell your friend-with-benefits that you're moving to California (even though you're not) instead of just being, well, what they call "assertive" or "communicative" and just telling him you're over it.
But the best of the section has to be this groundbreaking anthropological piece on single straight men "coming out of the cat closet."  Embracing their feline side.  Asserting that they are actually more set in their masculinity since they don't need the "wingman" that is a dog, but instead just have the self-sufficient cat as their primary relationship.
According to one expert-on-the-basis-of-the-fact-that-she-dated-a-dude-with-a-cat, "Straight men with cats seem to be really secure and stable. They don’t need to be running around the park and proving their masculinity like the dog guys.”  Got that, guys?
It's a head-shaking riff on the implications of dude cat ownership on masculinity.  They even interview a "cat therapist."  And cite Papa Hemingway (above left) as proof that dudes with cats can still drink heavily, bang lots of chicks, and hang large dead animals on their walls.
A-ma-zing!
Sorry, Fido, It's Just a Guy Thing (NYT)
Labels: artificiality masculinity menage a trois weird shit