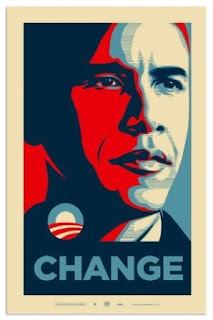 Thinking about change.
Obama-style change (sweet jesus, yes).  Seasons changing (daylight savings time coming up soon).  Hairstyles changing (flirting more seriously with that Jazz Age bob).  Priorities changing (little interest in bourbon, or late nights, anymore).  People changing (once flippant, now paternal).  Colors changing (hello, leaves).
One of the wisest bits I've gathered from my dabblings in Buddhism and yogic philosophy has been the reality of impermanence.  The fact that what most characterizes the life we know is transience; how foolish and unfortunate it is to cling to memories of the past or visions of the future; how futile it is to grasp so tightly to what we've grown accustomed to, digging our heels into the turning planet, trying to prevent it from churning along in its inevitable orbit.
Bits of physics (what little I know of it) and Process Theology, with their shared notions of the universe being in constant flux, perpetual change, ongoing creation, parallel these ecumenical ideas of ubiquitous impermanence.  There's something comforting about seeing such widespread cross-disciplinary acceptance of the whole idea.  So sometimes I wonder why it's so hard for us human-types to accept impermanence in all of its guises: the changing weather, or our changing bodies, or the relationships that ebb and flow with time and distance, or the priorities that shift according to space and place and moment.
Yoga Journal has a good piece hitting on some of this.  The article does a decent job of pinning down the more day-to-day manifestations of the sometimes ethereal notion of impermanence.  Read it, and find comfort in embracing the inevitable nature of change instead of resisting what is.  We waste so much energy resisting.
It's killer how you can see these ideas made real in your body during your standard yoga class.  You fight, and you fight, and you fight, refusing to open your hips up and swing low into that Triangle Pose.  Because it hurts, or you're afraid, or your foot slips, or you might fall out.  But then when you finally get sick of fighting and just give in to the pose and let your body be where it wants to be, whoosh! - it settles right in, and releases all that tension, and hurts like a bitch, and there you are.  And why did you ever fight that to begin with, when the resulting reality feels so damn good??
So don't fight the wrinkles, or the creaky back, or the lapsed friendship, or the peeling paint.  Shit changes.  What was is no more.  What will be is not yet.  And fuck if we can't just learn to sit here in the present tense and be with what is, even though we know it'll disappear, too soon or too late, doesn't matter; it will.
Change Is in the Air (YJ)
Labels: buddhism cheesy shit existential rambling yoga

perhaps we resist change because it is so hard, and it is hard. perhaps it's our resisting that makes it so hard.

on another note, i was reminded of the Nietzsche quote, "love is more afraid of change than destruction."