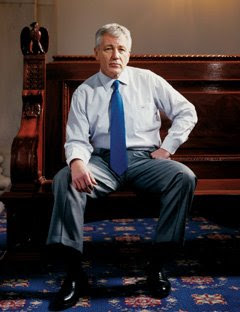 It's been about a decade since I've paid any close attention to Nebraska politics.  There's just so much, uh, RED there, especially since Bob Kerrey traded the Senate for the New School.  I'd rather not get my blood boiling reading all the Religious Right-fueled Republican crap going down.  There's a reason I live in a Blue State now.
But the New Yorker's got a thoughtful piece on Chuck Hagel right now that made me rethink the retiring Senator from Omaha.  We've heard increasing national buzz about Hagel as his role as a vocal critic of the Iraq War has escalated over the last few years, especially right around VP selection time, but I wasn't familiar with his close friendship with John McCain (and consequently dramatic refusal to endorse him) or his surprisingly pragmatic views on a few swing issues (read: abortion).
Granted, the guy voted with Bush some 95% of the time, and he's as anti-choice as they come, but after reading this (longish) piece, I've gained a good deal of grudging respect for him.  Maybe those rumblings about an Obama administration Cabinet position aren't so far off.  I'll be curious to see what Hagel's next steps are after his term ends.
Odd Man Out: Chuck Hagel's Republican Exile (New Yorker)
Labels: politics red states