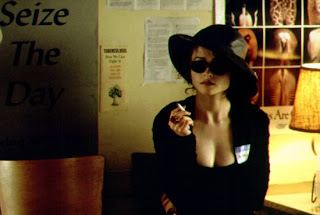 Did you see this article in yesterday's Thursday Styles section?
Cintra Wilson fills 3 pages with self-deprecating thoughts on Goth.  Yes, Goth.  As in, that chick who sat behind you in sophomore English who dressed like Morticia Addams and painted her fingernails black and listened to death metal while reciting Edgar Allen Poe.
Wilson does a much better job of saluting Goth subculture than I ever could, and it's worth a little read for a few tidbits you might not've known.  For instance, did you know that Goth has its roots in Victorian-era mourning garb?  Yeah, me neither.
The interviews with teens who identify as Goth or emo are interesting, too, for the light they shine (no pun intended) on the purpose this whole subculture serves, identity-wise.  It got me thinking about some of the formative sociologists I've studied in the past, scholars who identified self-presentation - be it as Goth, preppy, hippie, or whatever - as a consciously theatrical social act.
Erving Goffman, one of the granddaddies of the sociology of self-presentation, set the foundation for this study with his 1959 book, "The Presentation of the Self in Everyday Life."  Goffman basically argued that our lives, and the identities we present to the world, are not stable, and in being products of context, are highly theatrical.  That, in effect, we are engaging in theater every time we get dressed, walk out of the house, and say hello to the mailman on the way out the door.  This dramaturgical perspective is all-encompassing; it reduces social interactions to a series of "impression managements" shaped by the props and the costumes and the stage make-up we put on and take off every day.  For example: Goth. 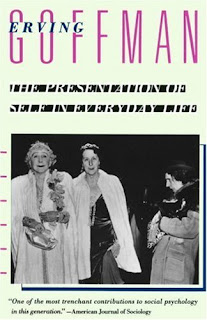 It's just a more extreme example of what the rest of us do everyday, whether that means carrying an ugly-ass Louis Vuitton purse to send the message that you can afford to spend $4,000 on some ugly-ass shit, or moussing your hair up into a Flock of Seagulls faux-hawk to tell people you're a wild and crazy kind of dude, or wearing non-leather shoes as an intended political statement because you're vegan.  All dramaturgical acts, all means of theatrical performance, all props to illustrate the message you are sending in the particular Self you are presenting.
Judith Butler, serious badass from Cal and widely-known feminist philosopher, queer theorist and post-structuralist critic, built on Goffman's foundation with her influential 1990 work, "Gender Trouble."  If you're a grad student in any of the above fields, you know her shit.  Butler's brilliant theory is basically that we're all doing drag; that sex and gender and sexuality are all constructs, all performances, all realities that we create in the little theatrical acts we perform every day, and so it's not just the drag queen transvestites down in the Tenderloin who are queening it up: we're all putting on drag every time we decide between trousers or a skirt, every time we cut our hair or grow it long, every time we wear boxers or a bra.  Little choices, big implications.
Not sure how I went from 15-year-old Goths to Butler's theory of performativity, but whatevs.  The NYT article made me think.  So often I think we write off sociology and theory as irrelevant and heady and suffocatingly ivory tower.  But reading Wilson's article made me realize that it's saying many of the same things Goffman and Butler did, just couched in language of Facebook and high school and pop culture music.  It's a good example of the ways in which our consciously chosen, small day-to-day lifestyle choices are theatrical performances of their own.

So think about that the next time you decide on an outfit for that big date.  You're putting on your own little play in the process.
You Just Can't Kill It (NYT)
(And that's Marla Singer above, Fight Club-style.  How I love Marla Singer, and her darkness.)
Labels: bodies fashion gender politics macabre pop culture sexy intellectuals sociology theater