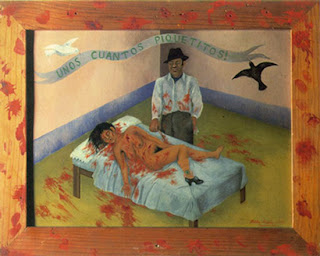 So I did get down to the Frida Kahlo preview last week, and it was rich, really rich.

Notwithstanding her tumultuous lifelong love affair with Diego Rivera, Kahlo's life was a picture of tragedy. From her shattered spinal column (irredeemably damaged in a youthful bus accident) to her struggles with infertility to watching her own sister have an affair with her womanizing but charismatic and brilliant husband, the woman trudged through a lot of shit.

And walking through the exhibit, soaking up images of blood and death and heartbreak and unibrows, I couldn't help but realize, quite clearly, how central pain is to the project of creation. That pain is what creates, pain is what catalyzes, that pain, when processed and channeled and put to use, is what so often fuels art. And that Frida Kahlo's life was a testament to the fact that if you are not afraid to use it, to dive into it, your very deepest pain can be your greatest gift. Because the reason we're still talking about this fiery diminutive leftist dead Mexican woman is that she, in the midst of near-perpetual heartache, managed to translate that to the canvas.

And whew, those canvases. It's a relatively small exhibit compared to some at the MoMA, but rich in quality and span. It's particularly fascinating to see the collection of photos and art related to Diego and Frida's time spent in San Francisco, where a number of the soap operas of their lives played out (including their second marriage, following their first divorce).

Highlights for me were A Few Small Nips (1935), above, which was inspired by a newspaper article about a crime of passion, but informed by Kahlo's pain on discovering Diego's affair with her sister. Note the bloodstained frame and the red fingerprints; the torment literally bleeds out of the painting itself. Holy shit. 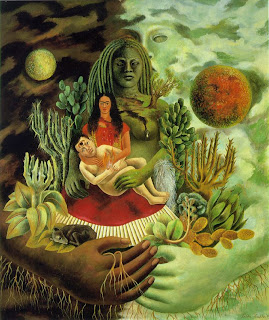 I was surprised to dig another very different piece: The Love Embrace of the Universe, the Earth (Mexico), Diego, Me and Senor Xolotl (1949) which was created toward the very end of Kahlo's life, and which takes a few minutes' analysis to really delve into. Note the gauzy figure in green embracing Frida and Diego; the anthropomorphic hands of the plants and trees; the blood gushing out of Kahlo's broken heart (this following her reconciliation with Rivera), and his childlike rest in her embrace. It's rich with symbolism in a marriage of mind, body and cosmos.

I could go on. But mostly I walked away with a number of words repeating in my consciousness. Certain themes, really, that struck me about the nature of Kahlo herself, her art, the spirit of the whole thing. Political. Queer. Boundary-breaking. Unusual. Beautiful. Grotesque. Sublime. Serious (her downcast eyes, her infrequent smiles, even in family photos). Indigenous. Native. Sexy, sexual. Bohemian. Wildly unconventional. Socialist. Earthy, earth-connected. Intricately tied to San Francisco. Real. Present. Sensual. Broken. Breaking.

Kahlo's widely quoted throughout the promotional materials with this self-aware statement: I paint my own reality. The only thing I know is that I paint because I need to.

Go rent the Salma Hayek biopic from a few years ago, watch that first (ignoring the terrible turn by Ashley Judd), and then hit the MoMA. The experience is much richer for it when you've got the images and narratives of Kahlo's life fresh in your memory.