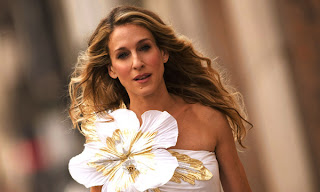 Yesterday I did my chick duty and went to see the new Sex and The City movie.

I don't do well around herds of giggly girls who like to shop. But I, you know, had to do my anthropological research on this whole contemporary American urban gender mythology thing. So I snuck into a 3:50 showing, hoping that a quiet Monday afternoon matinee wouldn't be overrun with chicks bearing bejewelled cell phones and knock-off heels.

I was wrong. The place was packed with a gaggle of girls and gays. I knew things would get ugly when Fergie's "Labels or Love" came on with the titles and everybody cheered. And it was all downhill from there.

1. Bad writing.
2. Bad acting. Ugh, Kim Cattrall. Ugh, Chris Noth. Really? That's the best you can do?
3. Conspicuous consumption sold as cinema! More product placement than I've seen in a long, long time.
4. Why the random unnecessary Fashion Week bit?
5. Charlotte makes me want to stab myself.
6. Samantha is such a one-note character.
7. Sarah Jessica Parker has really aged.
8. They're all wearing too much stage make-up. I couldn't listen to anything Mr. Big said because all I could think about was how heavy his foundation and blusher were. Ugh.
9. Sigh. Seriously? This is supposed to be about single women in the city? Wobbling around in ridiculous heels? No woman who actually lives and walks in a city can wear shoes that high. Promise.
10. My life will be complete if I never have to hear the words "Manolo Blahnik" again. Overrated.
11. Louis Vuitton is some ugly-ass shit. Why the hell people pay $1000 for those bags is beyond me.
12. Can we please flesh out these poor male characters please? Give us a little depth, por favor.
13. Just superficial all-around. Much moreso than I remember the series itself being.
14. And a lap-dog? Really?
15. Sushi nipples. Whoa mama.
16. SJP looks like a drag queen.
17. More product placement. Wedding gowns. Dior. Skyy. Smartwater. Sigh.
18. Over 2 hours? Really? Longest movie ever. And did we really need the cheesy bridge reunion scene when Miranda and Steve get back together?
19. Um, not funny. Wasn't the TV show at least funny now and then? Where'd the humor go? Replaced by the big earrings and bad costumes?
20. Sex commodified. Ugh.
21. Speaking of, where IS the sex?

Ok, could go on. But Anthony Lane in the New Yorker says it soooo much better than I ever could. Please, please read his review. The guy nails it all, from the cattiness to the cheap shots to the commodity fetishism to the pornographic nature of the whole materialism thing (and no, I'm not talking about the sex). In fact, I was surprised by how very little "sex," per se, was actually a vital part of the whole shebang. In spite of SATC's claims to being earthy and raw, I found the whole thing to have this glossy, artificial veneer instead of being a living, breathing creation.

There's a subset of thinkers who've connected the obsession with labels with a certain kind of desexualized fetishism, arguing that the desire to consume fetishized labels like Louis Vuitton and Gucci and their ilk actually serves as a convolution of the actual animal sexual desire for women. I am a big believer in this line of thought. I think a lot of women channel their confused and/or misdirected and/or misunderstood sexual desires into consuming material shit instead. Manolo porn. Closet fetishism. Shoe obsessions. You've read all the sexualized theoretical analysis of fairy tales and Cinderella and the whole sexual symbolism of the "fitting into the right shoe" thing, right? Yeah, that's what I thought. Look how this movie ends. Still alive and kicking in 2008.

Lane says it best in his last line:
"I walked into the theatre hoping for a nice evening and came out as a hard-line Marxist, my head a whirl of closets, delusions, and blunt-clawed cattiness. All the film lacks is a subtitle: “The Lying, the Bitch, and the Wardrobe.”"

Lane's turn-of-a-phrase just makes the shitty screenwriting in the film itself seem even more neutered and blase. Skip it!

Anonymous said…
I did my chick/anthropological duty, too. I agree with a lot of your comments, esp. re. the Samantha character and the Cattrell/Noth performances. I also didn't like the underlying message that time makes all the other issues just go away, particularly with Carrie/Big and Miranda/Steve...wait it out long enough and don't communicate for months and poof, your relationship is back on track? I read another review about how painful it is to watch Big's character because he's so extremely passive, and I completely agree with that as well.
Anyway, those were some of my impressions. My summary when leaving was "that was cheesy" (esp. all the scenes between Carrie and Louise).
b
June 5, 2008 at 8:59:00 PM PDT

Jess(ica) said…
TOTALLY agree. What made the TV show good was totally lacking in the movie. Although, for that matter, upon rewatching the last couple seasons of the show, I was more and more annoyed with their narcissism.