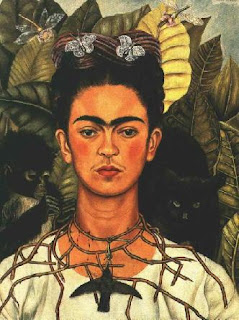 Frida Kahlo opens this week at the SF MoMA. This is one hot exhibit. The kind of buzz I haven't seen since they had the Chagall exhibit some four years ago. Member preview day is Thursday and I can't wait to hit the action before the herds thunder in.

June usually means fog here in the City, and I'm happy to say we haven't seen much of it. Sunny and gorgeous, consistently so. I'm roughly the color of tree bark. Doesn't matter how much I know about skin cancer or how guilty I feel about all those crispy summers lifeguarding. I can't stay inside for anything.

The blogosphere is kind of buzzing about this piece in Salon about Rebecca Walker and her mother, Alice. Both, of course, have carved out lives as writers and thinkers and activists in their own generations; you know Alice as the author of The Color Purple and Rebecca as one of the most famous faces of Third Wave activism. But there's serious brouhaha going on between mother and daughter. Phyllis Chesler tries to piece together the latest schism based on Rebecca's angry diatribe about her mother in the Daily Mail. It kind of hurts my heart. I don't know who's right anymore. Both Alice and Rebecca have come to where they are from very different places, and I hear the validity of both's arguments, and I wonder if it's possible to have everything, and I doubt that it is, and I wonder what we should want, and I wonder where we will go, and I wonder...so much. The lesson for me in part is that certainly our most dearly-held political and ideological and social stances ebb and flow with the changing of years and lives. And that it's healthy and necessary to constantly be revising our outlooks on what it means to live well.

And uh, speaking of living well: did you see that the most-emailed NYT piece today is about sex-starved marriages and two (very politically and religiously different) couples who decided to have sex every day for a year as a counter to the inevitable descent into a sexual desert that marriage often becomes? This is one of the major reasons I've never felt a huge need to get married: I mean, it seems like if you're still trying hard and not taking a relationship for granted and working at something without assuming it will always be there per contract or ring, you can at least hope that the spark will stick around a little longer. And I don't want to believe that a long-term thing has to mean monotony or boredom in the bedroom. Anyway, for those reasons and more I found the article interesting. Especially the way the super-Christian lady won't even call it sex, but calls it "the gift." WTF?!

Read it, and then please get outside. It's so beautiful.