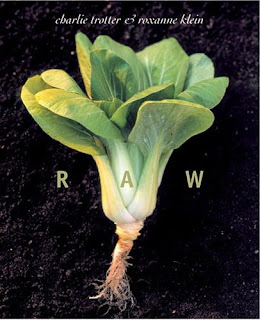 Being so serious about my yoga practice of late has meant a natural and concomitant increase in my raw food intake, as well. One sort of comes with the other; the more raw and hydrated and healthy I am, the better and stronger and more flexible my yoga becomes. So it just sort of happens that I haven't really had much sugar or white flour or cheese or whatnot in, well, a really long time. And I feel, well, terrific. Beyond terrific.

So yesterday I ended up having ice cream AND mashed potatoes and what-have-you, and today I feel literally hungover. Foggy head and tired heavy eyes and slow lethargic body. I can't believe the direct difference. It's like a frickin science experiment. I woke up thrilled to dive into a half a cantaloupe and get back to the clear-headed buzzing mad-healthy place I've been steadily occupying of late.

Anyway, so I dropped some serious bucks the other day at Whole Paycheck loading up my basket with some new novelty foods I discovered from Roxanne's. If you're not familiar with Roxanne Klein, she was one of the first well-known faces of the whole raw food movement five or six years ago. She ran a very hot (and now-defunct) raw restaurant in Larkspur with her husband and now since January has rolled out a line of packaged goodies sold at Whole Foods in California (and hopefully eventually across the country).

I picked up two boxes of delicious-looking little snacks called "Vanilla Raw Energee" (ahem), and a Chocolate version as well. They do kind of look like, um, mouse food, like the kind you put in the corner by the baseboards to catch little vermin running around your old house, but they taste amazing and pack a punch; I've been throwing a few in a Ziploc bag and snacking on them evenings when I bartend, and they're perfect sustainable energy to get me through 6 or 7 hours when I'm usually wilting from hunger.

Check out these ingredients: sunflower seeds, sesame seeds, goji berries, pumpkin seeds, cashews, coconut, honey, vanilla, maca, mesquite, chia seeds. Note how many (all?) of those foods are listed as superfoods in lists of the World's Healthiest Foods (see link to the lower right, for instance). And they taste so rich and delicious. Such a better alternative to the rush and crash of sugar or even grains that will wreak havoc with your blood sugar.

Link below to a 2002 article from the Chron when Roxanne's was still running; it's good for background info and some basics on raw foods, as well. Then, a link to Roxanne's current website with further details on the delish offerings you can pick up at your California Whole Foods stores.