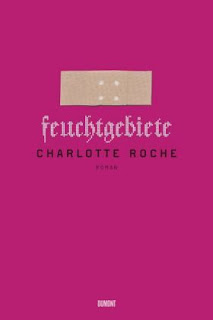 Interesting little article in this morning's NYT about this racy new German book that apparently everyone's talking about: "Wetlands" (or "Feuchtgebiete").

Sounds like a modern-day Erica Jong; lots of talk of sex and bodies and taboos writ large, all by some cute 30-year-old TV presenter named Charlotte Roche. The popularity of this frank and controversial little novel seems particularly germane given the recent media hubbub here in the States over what is ostensibly such a radical and progressive and "empowering" SATC legacy.

Haven't read this one yet myself, but in terms of real edge and real boundary-pushing, it sounds a million times more engaging than the label-whore-fest that was the SATC movie. Whereas when it debuted a decade ago maybe SATC was truly edgy, I think now in this particularly Botoxed and waxed, plasticized and artificial era of beauty standards, the really radical stuff is happening here in Roche's territory.

Good for her for getting the Germans' panties in a twist. I love it.