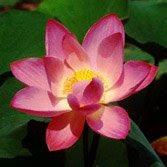 So I've been reading all this shit lately about aesthetics and yogic theory. Part of my ongoing research, you know. And I find that just as I think I've got a clear picture of things, something gobsmacks me out of the blue.

This week, it's been the Lotus Blossom. Part of the reason I was ever interested in studying theology per se is that I wanted to further plumb the seeming overlaps between ostensibly different religions. You know, like the contemplative traditions in Buddhism and Christianity. The cross-religious notions of salvation. Bridging gaps, finding connections, you know.

So I got into this work on art and aesthetics the other day and it sent me through the roof. Turns out the lotus blossom has this remarkable cross-cultural sacrality - I mean, we're talking sacred symbolism in Hindu, Buddhist, Chinese, Native American, Japanese, and Egyptian traditions, just to begin. And it's this beautiful mix of using nature to symbolize the kinds of creative and spiritual ideas that are fundamental to any world religion.

The lotus - also known as a water lily, as in the kind you see floating in Monet's ubiquitous paintings - has always been a favorite flower of mine. I mean, jesus, I'm a Pisces; I dig the water and the peace and the grace and the wide open buds of the lotus. But little did I know it had such powerful symbolism.

The lotus is to the East what the rose is to the West. In Buddhism alone, the lotus represents enlightenment. Why? Because it takes root in the muck, in the dirty messy fertile soil at the very bottom of a pond, and has to work its way up through the dank scummy water (what the Buddhists use as a metaphor for our difficult life experiences in the material world) until it finally reaches the top of the pond, where it bursts open with the rising of the sun. This, of course, is the "enlightenment" bit. And the idea is that the spirit can bloom and flourish through any and all murky circumstances.

The sacred art and stories of India parallel this association of the lotus with rebirth. The ancient Egyptians saw a metaphor for creation and resurrection in the morning opening and evening closing of the lotus; they believed it was the first flower of the universe, the source of the gods, and they used it as a heavy theme in their art. To the Native Americans, the lotus symbolized the power of the sun to transform energy into food; again, creation.

Beyond that, there are fascinating implications for the medicinal use of the lotus and its heavily-seeded pods for inducing dreaminess and languor (according to legend), along with various shades of meaning attributed to the different colors of pink, white, and blue varietals.

There's a whole other realm, then, once you get into the yogic parallels of the asanas; the Lotus position itself and the opening of what are referred to as the Second chakras, which are rooted in the hips and pelvis and associated with openness and receptivity, adaptability and surrender.

But that's a story for another day. My yoga class awaits.
Labels: buddhism flowers religion yoga