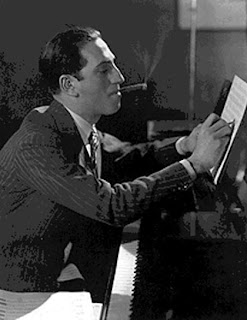 B and I caught the Smuin Ballet's Dancin' With Gershwin tribute earlier this week down at the Yerba Buena Center for the Arts. I have to say, it was vastly disappointing.

We tend to be tough critics in terms of dance and choreography, I'll admit, but I went into this one really wanting to like it. Gershwin is my favorite mid-century American composer, even moreso than Ellington and Berlin and other stars of the Great American Songbook. Chestnuts like Love Is Here To Stay and They Can't Take That Away From Me have long been my defaults, whether it's singing or playing or just walking down the street humming a tune. So I was excited to see what the late Michael Smuin's co. did with its usual mix of classical dance and Broadway-style costuming and choreography.

There were a few moments of inspired choreography, yes, and the music was stellar, as expected, with a wide range of performers and some new renditions that I hadn't heard (Cher! Sting! Who'd have thought?!). But the costumes were loud and over-the-top, stealing focus from the dance itself; the props were gimmicky and gratuitous (parasols! desk chairs! fake afro wigs!); and the sets were awkward and amateurish. And please don't even get me started on the human-sized Biblical shadow puppets that ruined Cher's surprisingly enjoyable version of "It Ain't Necessarily So." The blue-hairs there that night loved it, but it all seemed somehow crass and cheap to me, pandering to mainstream tastes at the cost of artistry and creativity.

I'll know what to expect next time, but I have to say, it'll take good music like Gershwin's to get me to another Smuin performance, I'm afraid.