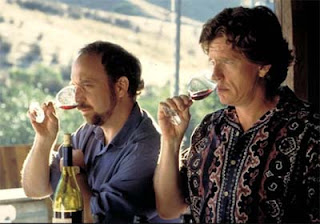 Did you catch this little article in yesterday's NYT? I kind of love it.

Basically, this guy Eric Asimov posits the question that maybe wine quality isn't all about ratings and bouquets and legs and all that other semi-elitist crap you hear about from the People Who Know. He cites two studies that show that, in blind tastings, people often can't tell the difference between the pricey and the swill, and in fact will generally assume that the more expensive is the better wine - even if it's the same wine!

Toward the end, Asimov hints that perhaps the beauty of a particular wine - be it Two-Buck Chuck or Dom Perignon - is more a product of the context in which it's consumed. So that cheapy Italian table wine you drank at that divey seafood restaurant in Manarola overlooking the Mediterranean while staring into the eyes of one hot Casanova might in fact brand itself into your tastebuds and your memory more forcefully than that $200 bottle you drank at the trendy restaurant downtown on the business account.

Context! Yes! There's something kind of romantic and populist and human about thinking about wine quality this way. A nice counter to the subtle elitism and status-seeking that is often a huge part of the whole choosing-a-bottle process.

Wine's Pleasures: Are They All In Your Head? (NYT)
Labels: arrogance wine