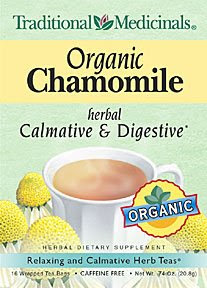 Ok, let's just be clear here: I am a caffeine whore.

Have been, will be, it's just what it is. My coffee pot is the first and only thing I want to see in the morning. And sugar-free Red Bull gets me through more social interactions than I'd like to admit.

I am totally aware that the whole major-chemical-dependency thing doesn't really jive with the whole raw food thing, but whatevs. We are works in progress. So I refuse to feel guilty about needing my cuppa joe every day. End of story.

That said, I'm trying to, uh, loosen the shackles a bit. And studying all this Chinese medicine shit lately has refueled what had been a waning interest in herbal alternatives. So, in spite of the fact that drinking hot tea makes me feel like a goddamned middle-aged British lady lacking the cojones for regular coffee, I'm making an effort.

Enter Chamomile. It's surprisingly delicious, remarkably soothing, smells of lush ripe apple, and is actually good for you in all kinds of ways. After a few late-night cups, it's settled into a solid second-place status behind my old stalwart, Peppermint.

Benefits? Among others: it's anti-inflammatory, anti-anxiety, and anti-bacterial. You can drink this stuff (or actually use it topically) to soothe skin issues like eczema or irritation. It's calming, too; I've long struggled with falling asleep at night (hmm, perhaps related to the ungodly caffeine intake, Miss Obvious?), but chamomile's mild sedative effect lulls me into relative stillness and slows my breath and my heartbeat so that I can actually chill out. It's also been used for centuries in Europe for its anti-spasmodic effects, which means gold for things like menstrual cramps or an upset stomach.

Not saying you should ditch the coffee or anything, but if you're finding it hard to slow yourself down or struggling with unfortunate digestion, give it a try. Peter Rabbit's mother used to give it to him to help him sleep. And if Beatrix Potter isn't a good enough reference for you, I don't know who is.

Be careful if you're allergic to ragweed, though; Chamomile's a member of the family, so you'll want to stay away if so. And on a random note: apparently it's great for sunny highlights when mixed with lemon juice during the summertime. So get in there, blondie.
Labels: god i feel like a middle-aged lady health insomnia

molly said…
I swing back and forth between tea and coffee addictions, and am currently all about stovetop lattes with organic milk, made by my husband before I crawl out of bed, but i digress: When it comes to herbal beverages I most love and recommend rooibos. Often called "red tea" but not a tea at all, its actually a bark of somekind I think. But delish, try milk and honey, or not. As many or more antioxidents than green tea. Said to cure many different ills. Also good for topical applications. Maybe it creates red highlights? Hm...something to look into.
April 24, 2008 at 5:44:00 AM PDT