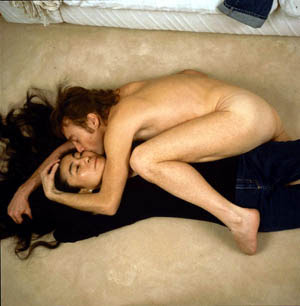 After weeks of good intentions and no action, I finally made it up the hill to the Legion of Honor to see the "Annie Leibovitz: A Photographer's Life" exhibit the other day. And I say "up the hill" because it definitely involved trudging up a long-ass drive past idyllic golfers overlooking the Pacific to the entrance of the museum perched up on the hill in the Presidio.

If you haven't been there recently, it's worth revisiting. Lincoln Park is weirdly quiet, full of birdsong and breeze, and strangely removed from the more bustling City just a quick Muni ride away. There's a killer view of the Golden Gate Bridge and the Pacific to the west; I had forgotten, too, that a mold of Rodin's "The Thinker" sits at the front of the museum to greet you on entering.

Before I get to the nitty-gritty, might I also add that the Legion of Honor has a sweet little cafe tucked in the back corner of the lower level that's "green" almost to a fault. After wandering through the Leibovitz exhibit I tucked in to "locally grown organic [pre-peeled] tangerines in a compostable plastic container." Whew. You can haul your little compostable sack lunch out to the adjacent sculpture garden, which overlooks the water, and when I was there on a Thursday afternoon, was peppered with French tourists, art students, and middle-aged Ladies Who Lunch. Sitting there eating my ridiculous tangerines, I had another of those increasingly frequent moments when I looked up and listened to the birds twittering and saw the ocean beyond and thought, with a strange freeze in time: I live here! Holy shit! I live here.

But that's all small and silly compared to the Leibovitz action inside. If you're not familiar with her, first of all: pathetic. Second of all: probably the most famous photographer in America right now. Vanity Fair, Vogue, Rolling Stone, etc. She's of course responsible for the iconic John Lennon-Yoko Ono shot above, taken just a few hours before Lennon was shot. The retrospective includes her more recent work, including famous shots of Demi Moore naked and pregnant, Colin Powell and Norman Schwarzkopf, the Clintons, Brad Pitt, Chris Rock, Queen Elizabeth II, etc. The woman has serious access to some major political players and pop culture personalities.

The revelation of the exhibit, however, comes in the unexpected interweaving of Leibovitz's personal photos with these monolithic celebrity portraits. Somehow I had forgotten in the wake of writer Susan Sontag's death a few years ago that she and Leibovitz had been partners for some 16 years. Walking through the exhibit, you quickly realize that it's in many ways an elegy, a portrait of the end of a love affair, so intimate it sometimes becomes difficult to take in. I was gutted on leaving.

Check this: Leibovitz lost Sontag to cancer in Dec. 04, lost her father two months later in Feb. 05, and had twins born to a surrogate mother three months later in May. Holy being alive. And of course she named the two new daughters after these two recently-lost huge figures in her life: Susan and Samuelle. Need I also mention she gave birth to her first daughter, Sarah, at 51? Sweet jesus. 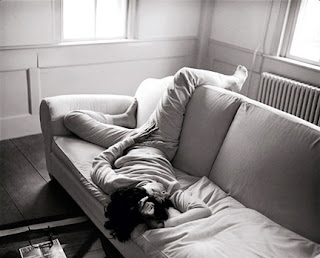 So all of these experiences are captured in this exhibit, interspersed with the Chris Rocks and the Arnold Schwarzeneggers and whatnot, these harrowing portraits of death and travel and humble apartments in Berlin and Sarajevo and shots of Sontag overlooking the Seine and then later laid out in her death clothes, funereal, and family scenes frolicking at the Maryland beaches. And the silence of it all strikes you, the power of the arts to sort of encapsulate so much of being alive, to make you feel so much of living and dying and loving and aching just walking through a climate-controlled basement room for a couple of hours.

The strange and disappointing bit was that the exhibit was weirdly silent about the nature of Leibovitz's relationship with Sontag. Even the introductory notes would only deign to refer to Sontag as AL's "long-time friend." Not even the desexualized "companion" or "partner," no; but "long-time friend." WTF. And meanwhile the content of the exhibit itself screams out the intimate nature of their life together. Weirdly closeted. I don't know what to make of that.

The Chron had a good interview with AL when this exhibit first debuted in New York in '06, and another current review from the Legion of Honor exhibit itself. Both give some additional insight into Leibovitz, her art and her career. You really come to understand that this collection was her means of working through her vast grief and simultaneous joy at so many huge life events hitting in a very short amount of time.

Finally, that moving snapshot above is Sontag herself, "Susan at the House on Hedges Lane," 1988.
Labels: art sexy intellectuals