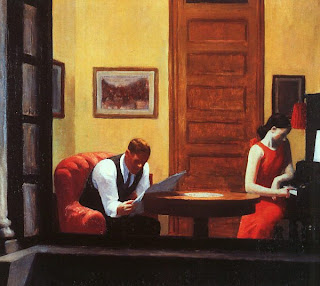 Ok, so I really, really have a thing for Edward Hopper. It's nothing new, of course - only one of the longer-lasting love affairs of my life.

This to the left is one of my favorites, "Room in New York" (1932), which is actually owned by the Sheldon Gallery in none other than Lincoln, NE. (You have no idea to what great degree this redeems Lincoln for being a corn-fed college town full of Applebees and Blockbusters. No idea.)

Apparently there's a big Hopper exhibition right now at the Art Institute of Chicago through May 10th (after showing in Boston and DC last year), and this piece is included. Obvs., go if you're around. Hopper's probably best known for his iconic "Nighthawks" (1942). You've seen it, of course; it's the one in the diner on the city corner, looking in through the windows at night. But two other favorites of mine, among the many, would be "Morning Sun" (1952, below) and "Chop Suey" (1929).

I love Hopper for many reasons: because his work so often feels lonely, melancholy, moody, spare; because he does so much with morning light, and style, and space; but perhaps foremost, because he so often features people being quiet together. His work engages questions of isolation and solitude, company and angst, the same kinds of difficult relational struggles that Stephen Sondheim tackles in his musical work.

Slate featured a slideshow piece last week on the architecture of Edward Hopper, and it's a nice taste of his other subject matter: heavy on landscapes, more rural, outdoorsy, featuring lighthouses and clapboard homes and water and wind, often from a distance. The Slate piece uses two words to describe his work - "unsentimental" and "yearnful" - that seem particularly suited to his Modernist style. 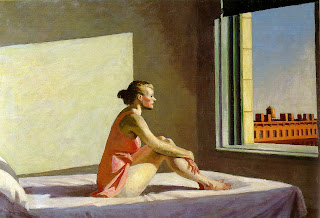 Arts Editor had a smart little article about the exhibition last spring that's got some good perspectives on Hopper's whole oeuvre (along with a few big postmodern words on Text if that's your thing). It's called "Alone, Together," which of course perfectly describes the feel of so many of Hopper's paintings. Check it.

Anonymous said…
I love the almost surreal mood of Hopper painting. He forces the observer to depart from the mundane,
so I can understand your attraction. If you study El Greco you see a similar kind of effect. Painting should always be emotional and even evocative, like poetry.
April 3, 2008 at 11:36:00 AM PDT