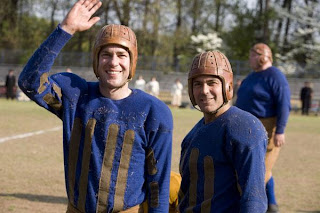 There's a good buzz in these parts right about now.

Today is our [pathetic] SF Giants' Opening Day, so the disinterested crowds will be heading down toward McCovey Cove for an afternoon of sunshine, beer, and mediocre baseball. It's really not looking good for the guys in black and orange. And this year they don't even have Barry to draw people in. On the upside: cheap tickets!

Everybody's in a tizzy, too, because the Olympic torch is running through on Wednesday, and if you've been reading any of the news reports from London and Paris, it won't come quietly, especially in this protest-minded city. All of the Tibet and Darfur activists have been organizing for weeks. The torch will run a six-mile route along the waterfront on Wednesday afternoon, and people will definitely be mobilized a) to see it, and b) to resist it. No matter whether you're on the celebratory or outraged side of things, it'll make for an interesting day, for sure. I think it's the only North American stop, if I remember correctly? Which makes sense given that SF has in Chinatown the largest Chinese population outside of China proper. They decided not to run the torch through Chinatown out of fears it would clog the narrow streets...probably a good move considering how hard it is to walk down one on just a usual Saturday morning.

The weather's been fairly gorge, per usual, which means lots of running. My body hurts. A lot. On a regular basis. It's a good hurt, but yesterday I think I was definitely walking like a cowboy who just spent two days in the saddle. I need some serious yoga to undo this muscley tightness.

Spent one hot evening with my favorite paramour last night in his newest directorial effort, Leatherheads. The film is a little charmer, heavy on tinkly vintage music from Randy Newman and light on story arc. Clooney was his dashingly Clark Gable-esque self, per usual, and John Krasinski as his corn-fed war hero counterpart couldn't have been more perfectly cast. Renee Zellweger as the Rosalind Russell role left me pretty cold, but that's to be expected; I cannot fathom why this puffy-faced simpering lip-pursing chick has made it so far in Hollywood. And don't even get me started on the Oscar nomination for Chicago. Girlfriend couldn't dance her way out of a cardboard box. But do go for the costumes and the aesthetics and the aforementioned music. I'd kill for the collection of cloche hats that Zellweger's character sports throughout.

And on a final cinematic note, last week, in the midst of an incredibly frustrating 5-day bout of laryngitis, I finally sat down with Marion Cotillard and her Oscar-winning performance as Edith Piaf in La Vie en Rose. Dark, depressing, intense; decently put together in terms of creativity for a biopic; and definitely highlighted by Cotillard's transformative performance. I hadn't known much about Edith Piaf; one of the reviews I read called her music's Sylvia Plath, and I have to say, that seems quite appropriate. A tragic life, a tragic love.

On a final note for this random morning update: Lara Bars debuted a few new flavors a few months ago. I've done my duty in taste-testing and can say with some experienced taste buds: skip the Key Lime Pie, and buy case upon case of the Pistachio. Totally delicious. And full of raw prana-chi goodness.
Labels: baseball cinema i left my heart pistachios