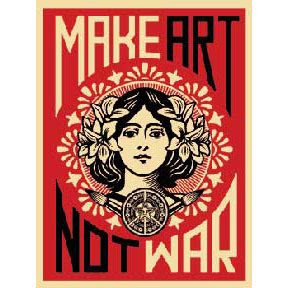 It's grey and cool, and on the other side of Nob Hill, the Financial District is teeming with anti-war protesters, on this fifth anniversary of the start of the Iraq war. They're chaining themselves to the Federal Reserve, staging die-ins in the street, and bringing traffic downtown to a grinding halt. Over 40 have already been arrested as of late morning. Tonight's massive anti-war march is scheduled to start at 5, which means Market Street will surely be a bottleneck, and it's set to begin at Civic Center, which is just across the street from the Opera House.

I have tickets for a Jerome Robbins tribute at the SF Ballet, all West Side Story and snapping gang members and dancing sailors. I can't help but wonder if the performance will be haunted by echoes from the chanting protesters across the street.

An activist interviewed in the Chron this morning hit on what I think is the saddest part of this Bush-led crusade: the fact that, after five years, the war has simply become normal; it has long stopped being "the new normal" and settled into being simply the white noise behind the other news that fills our brains, the Britney updates and the March Madness brackets and, oh yeah, there's a war going on, a war that we started blithely, killing a million and displacing four times that. I hope today's protests remind us that this doesn't have to serve as the backdrop to our days for the years to come.

I've been doing a lot of work lately on the notions of craving and greed, that whole engine fueling capitalism that teaches us we need More, Bigger, Better, that we can't be content with what we've got. It falls quite nicely in step with the Buddhist and yogic teachings on need and abundance. Read this article the other day on the lifestyle abundant, that subversive notion that maybe you don't need a newer phone or a bigger TV or a zippier car to be happy. The whole idea is that - get ready for this - everything you need, you already have.

It's revealing to ask yourself: How would my life change if I lived as if this were true? If the health and love and friendship and shelter and material comforts I already have are exactly what I need?

Thinking this way completely revises the concept of "need." It lets you step back and breathe and stop striving for empty visions and goals and oases in the desert. You learn to be content with what you already have. You see that wants and needs are so relative - that the new iPhone you're dying for is extraneous compared to the food and clothing that Iraqi girl is, quite literally, dying for.

And on a day like today, with an awareness of our relative affluence so frankly thrust into our faces, I think it's a good time to think about how much we already have, and to let it be enough; to stop throwing away our lives grasping at illusions, at apparitions, when all we need is already in our hands.
Labels: buddhism bush sucks existential rambling living simply