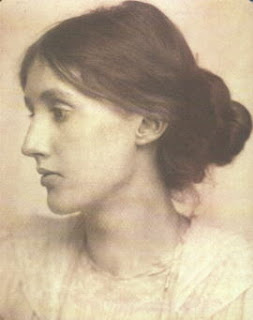 On this day in 1941, sixty-seven years ago now, Virginia Woolf wrote a note to her husband Leonard, loaded down her pockets with stones and walked into the River Ouse outside her home in England to drown.

I should be writing and researching and cleaning out files this afternoon, and instead all I can do is think about the image of Nicole Kidman wearing a prosthetic nose and frumpy mid-century clothing slowly sinking into a whirling sun-dappled river while Philip Glass's tumultuous score tumbles urgently below.

Virginia Woolf was one of those literary finds that made my life "click" together in that most rare of ways; I lost myself in her stream-of-consciousness novels and found great truth and wisdom and some indefinable lyrical beauty rooted in sorrow, and knew that literature had the power to speak volumes about what it means to be alive, or to struggle to want to be alive. Woolf, of course, was a prominent member of the bohemian Bloomsbury Group in 1920s London, along with fellow badasses like her husband, her sister Vanessa Bell (known primarily for her work as a modern artist) and her husband Clive, the philosopher Bertrand Russell and his wife Dora, etc.

If you don't know Woolf yet - for shame. Get yourself to a library immediately. Pick up Mrs. Dalloway - one of my top five books of all time - or To the Lighthouse, or Orlando, or A Room of One's Own. Just read the shit. It's a struggle at first, no doubt; Woolf's writing is intricate and fluid, tumbling from thought to thought in a myriad of almost impressionistic observations. But there's a great payoff, particularly in her ability to capture the psychological roaming of a single mind in the span of a few moments, hopping from past to present to future with lightning speed.

It being unofficial Virginia Woolf Day here, then, a few other assignments for you to start with:

1. Virginia Woolf via Wikipedia. You should know this shit already, but if you don't, go here first to get the basics. Check out the tantalizing details about her personal liaisons and the long list of published works for several goodies.

2. Go read Mrs. Dalloway. Then, ignoring the terrible film adaptations out there, move along to Michael Cunningham's Pulitzer Prize winning novel, The Hours, which is intricately tied to Dalloway and inspired by the last hours of Woolf's life. Both books will squeeze your heart in seven directions and leave you puffy-faced and, somehow, more alive.

3. Then, and only then, go rent the recent film version of The Hours. You know which one I'm talking about: Kidman, Meryl Streep, Julianne Moore, Claire Danes, Ed Harris, John C. Reilly; hello, cast! If that's not enough, the screenplay is actually remarkably true to the novel, and it swims along on that killer Philip Glass score. Um, watch it immediately.

4. Click on the "woolf" label below for my review of the musical version of To the Lighthouse that premiered at Berkeley Rep a year or so ago. Promise yourself you'll see it if you ever get a chance.

5. Go dig up that mix tape from 1997 and listen to the Indigo Girls' version of "Virginia Woolf." Sing along loudly, preferably loud enough to piss off the annoying girls upstairs.

That's a good Woolfian start. Then, breathe deeply, take the stones out of your pockets, and back slowly away from that creek you're standing next to. You really can't off yourself until you at least finish reading the rest of her work.

~~ Quiet descended on her, calm, content, as her needle, drawing the silk smoothly to its gentle pause, collected the green folds together and attached them, very lightly, to the belt. So on a summer's day waves collect, overbalance, and fall; collect and fall; and the whole world seems to be saying 'that is all' more and more ponderously, until even the heart in the body which lies in the sun on the beach says too, That is all. Fear no more, says the heart. Fear no more, says the heart, committing its burden to some sea, which sighs collectively for all sorrows, and renews, begins, collects, lets fall. And the body alone listens to the passing bee; the wave breaking; the dog barking, far away barking and barking. ~~ Mrs. Dalloway

molly said…
orlando might be my most favorite book to re-read multiple times. definetly in the top five. ill put the hours on my reading list.
March 29, 2008 at 3:03:00 PM PDT