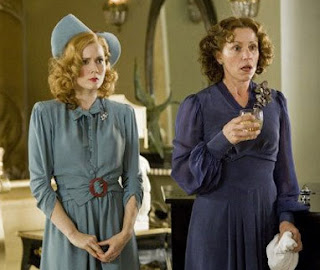 We have water again. (I know you were concerned). I will never, ever take a flushing toilet for granted again.

Saw this little indie-ish Focus Features flick the other night, Miss Pettigrew Lives For A Day. In spite of the awkward title and the less-than-intriguing trailer, it's a gem of a film, a nice surprise in its own way. Certainly nothing earth-shattering, but a frothy, flimsy little farce set in London between the two World Wars swimming in gilt and salmon and ochre. Pettigrew is based on a recently resurrected little novel from 1938 by Winifred Watson, a charmer drawing together a few little love threads, a theatrical subtext, and some unexpectedly melancholic reflections on impending war, poverty and the point of anything, really, in the midst of all that.

Frances McDormand and Amy Adams star, respectively, as the titular character and her American starlet ward. Adams has a tendency to annoy the shit out of me (that high-pitched voice, those constantly-fluttering arms), but she sings adeptly (accompanied by some excellent piano work) and her costumes alone - a mess of feathers and silks and gorgeous 30s styles - make her performance bearable. McDormand pulls off a few reflective moments that linger in your mind several days out, along with a funny running joke about food, and the music that underscores the whole thing, all Big Band and swing and blaring trumpets and snazzy brushwork, is reason in itself to see the film.

Go for the costumes and the music and the escapist Art Deco aesthetics. The rest - including a little something about love - is all just window trimming.
Labels: cinema music