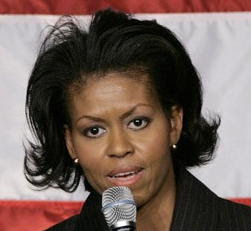 Did you see this recent profile of Michelle Obama in the New Yorker?

I've felt the Obama-love creeping slowly since last winter, in spite of my best intentions to lean toward Hillary (on principle, if nothing else, and also because it would be pretty sweet to have Billy C. back in the White House in one form or another). And, truth be told, my vote in the California primary did go for the senator from Illinois. But I'm pretty late to the game on details, and now that we have a Democratic horserace for at least the next several weeks (if not through to August), I'm trying to make up for that.

The New Yorker profile itself is alternately fawning and vaguely disjunct, but it does grant a certain window into Michelle Obama's life. And I think it does well to point to the heavy role of race and gender politics involved in this year's contest. It's funny to me to imagine that she and Bill are one another's equivalents; by all means, it seems that both are immensely capable*, and I'm once again pleasantly surprised to have TWO more than adequate potential candidates running against McCain and his blonde Barbie-doll wife this fall.

On another Obama note, Salon had an interesting article the other day about, yes, Barack's voice versus Hillary's. Maybe it's just my weakness for baritones, but I found this question of the role of a candidate's voice intriguing; why, for instance, does the word "shrill" often get used for Hillary's voice, and how much of what people are hearing here is due to often-invisible and regularly-denied identity politics? Read it for an interesting take on the "little factors" that can swing an election.

The Other Obama (New Yorker)
Does Obama's Baritone Give Him an Edge? (Salon.com)

molly said…
thanks for these, ill check them out when i have a chance. ive also been leaning obama - did you see the music video will.i.am made? its awesome. even though it doesnt prove he would be a better president in terms of policy, it really hits its mark emotion wise. anyhow, i voted obama but tim voted clinton, so we participated but balanced each other out since we were still unsure. just in the slim change you havent seen it just google "yes we can" video.
March 8, 2008 at 6:06:00 AM PST