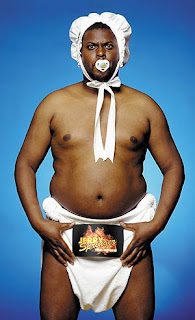 The Times had a quick piece the other day on the camp-tastic musical phenomenon, Jerry Springer: The Opera, that unfortunately came and went last week in the course of two quick performances at Carnegie Hall.

I feel like I've been shoving this show at people for years now, so forgive me if you've heard it already. I first saw this in rough workshop form at the Edinburgh Festival some six years ago - the creators had been tweaking things in preparation for a West End run, and the tickets were unbelievably hot and impossible to get. And worth every penny. I've never laughed so hard in my life.

The show ran for awhile in London before an ill-advised BBC televised version wrought chaos and hellfire at the hands of evangelicals (yes, they have them in Britain, too) whose utter lack of a sense of irony or humor meant outrage and calls of blasphemy. As a result, the planned Broadway run was shelved, and now with a heavy sense of the conservative Midwestern tourist musical-goer informing the decisions being made, it looks like a B'way run isn't going to come anytime soon. I know the show's run in a few bigger regional theaters, no doubt to great controversy, but you should try to see it if you can.

Really, it's brilliant in a lot of ways; melding opera -which was, of course, the common folks' medium back in the day - with the contemporary trash-o-rama scene that was the Jerry Springer show. Somehow, black Jesus in a diaper, pole-dancing, Satan and a chorus line of KKK members get involved. And the conceit of the whole thing, of course, is that Joe Bob and his three mistresses are going at it at full operatic speed. So you get "Fuck you, talk to the hand, cuz the face ain't listening" sung in brilliant baritone with a coloratura response. It's gut-wrenchingly hilarious.

Read the article, see the show if you can. Really a clever queering of the two ostensibly polar-opposite mediums.
And Blessed Are the Singing, Pole-Dancing Fetishists (NY Times)
Labels: musicals religion