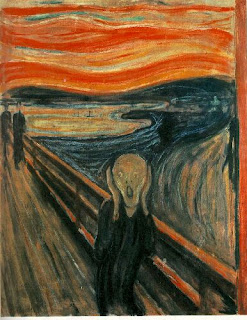 "Melancholy is at the bottom of everything, just as at the end of all rivers is the sea. Can it be otherwise in a world where nothing lasts, where all that we have loved or shall love must die? Is death, then, the secret of life? The gloom of an eternal mourning enwraps, more or less closely, every serious and thoughtful soul, as night enwraps the universe."
-- Henri Frederic Amiel
Yup, another cheery one from me today.  I promise, I really do promise, that one of these days I'll get back on a rose-colored bent. But for now, yeah, sorry, you're stuck. And anyway, given how the media's been consumed this week with the tragic news about Heath Ledger's untimely death, maybe it's not so vastly inappropriate after all. Here in SF it's been pissing down rain for two days and is due to do so through the weekend, so with the cold and the wet, a little dourness fits in.
Just finished getting my grubby little hands on Eric G. Wilson's new book, "Against Happiness: In Praise of Melancholy." The hardcover just came out on Tuesday, so I marched right down to the local indie bookstore to pick up my own copy after reading a few preview pieces and knowing it was right up my alley. And definitely - I think for any creative types in particular - it's a must-read, and a quick one at that. Equal parts philosophy, literature and psychology, Wilson's book explores the historical legacy of melancholia as muse, as source of creativity and birthplace of the arts, of music and poetry and painting and literature, falling on examples spanning Beethoven to Lennon to Coleridge to Springsteen to Joni Mitchell (and on and on).
Without romanticizing sorrow, he argues that to obliterate the dark and the difficult aspects of our lives (as the ever-increasing American reliance on pharmaceuticals threatens to do) would effectively eliminate a hugely important and essentially human part of being alive. 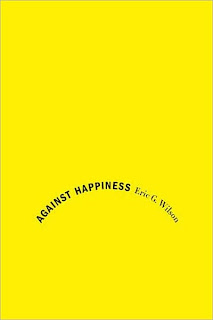 It's a quick read, albeit one with alternately charming and annoying literary aspirations, and worth your time, really. I can see how some might criticize it as romanticizing the kind of depression that turned fatal for figures like Hemingway and Van Gogh, but I also think the book fills a need right now as a counterpart to the glut of positive pop psychology crap out there further encouraging that bland boring bloodness brand of American "Have a great day!!-ness" from which Europeans and Brits are for the most part blessedly free.
Wilson draws on just enough Protestant and Buddhist (and really, even, Taoist) themes re: the naturality and ubiquity of suffering, the complementarity of dark/light, sorrow/joy, pleasure/pain, and the inevitability of death to tie in a few theological angles, too. Much to my pleasure, even the Transcendentalists pop up: Emerson gets a few lines (not surprising, given that Wilson has apparently written a book on him in the past), as does Thoreau. Anybody who references HDT and his masses living their lives of quiet desperation just a few pages up from Springsteen's "Nebraska" album is all right by me.
Read the damn book.
Here's a link to an excerpt in the Chronicle Review:  In Praise of Melancholy
(Oh yeah, and I don't need to tell you that's Edvard Munch, "The Scream," 1893, right?)
Labels: art books sorrow

Mariah said…
Mmmm, this looks delish. I can't wait to read it.