In honor of Molly popping her little bundle of joy out any second now, I give you another overdue edition of: Cool Hippie Shit You Should Really Know About. And today, it's a biggie:

Yes, the ancient Chinese tradition is no doubt worth more than a mere relegation to the wanky granola category, seeing as it has been around for thousands of years and practiced ad infinitum, but whatever. Earlier this week I had my first experience with acupuncture after being well-intentioned for literally years now and just never actually making it happen. And damn, am I glad I did it.

So my friend Llama is studying Traditional Chinese Medicine (TCM) right now and she recommended this stellar practitioner she'd visited, so I looked the lady up and booked my little gig, not really knowing what to expect. I've been restless and feeling "off" for a few months now, what with a lot going on in Real Life and whatnot, so it felt especially appropriate to get in there, along with some mysterious lingering health problems that Western medicine has simply failed to address holistically. So I went in with a full plate.

The clinic is in Glen Park (a quick Bart ride from downtown SF, where I live), a neighborhood that seems to be gentrifying slowly, filled with little coffee shops and neighborhood ethnic restaurants and a whole strip of alternative medicine clinics and used bookstores and whatnot. Charming. Reminded me a lot of London, actually (could've been the drippy grey day, though, too). I walked in and we covered the basics, and then settled into a "why are you here?" conversation that involved my health history, emotional status, eating and exercise habits, and whatevs. You know, all that shit the Western doctors really don't care about or have time for. The doc (who has degrees in both Western and Eastern medicine - sweet) then did this pulse diagnosis thing (don't remember what it's called, sorry) and pretty much hit the nail on the head in terms of what's deficient systemically. She used that to determine which points on my body she would emphasize with the acupuncture.

So then we rolled into the little room with a long table where I laid down (no getting naked necessary, bonus points there). We continued our conversation, all the while she's poking and prodding, and I'm thinking she's just preparing my body for the needles. About five minutes in, I realize she's already put the needles in - several in my ears (called auricular acupuncture), on the top of my head, at my wrist, on my feet and my ankle - and I hadn't even realized it. The beauty of lying there is that you really can't see the needles in your body, which eliminates the problem of freaking out when you see this shit poking out of your ears. It was wild - the points she chose, say, in my foot, according to TCM align with my spleen, and the points in my forehead, with my heart, and by manipulating the energy meridians at those seemingly externalized points, she began to move the qi ("chi") around.

Ok, stay with me here. I know all this talk of meridians and qi and whatnot can make people shut off. So she put a bell in my hand to ring if I got freaked out for some reason, cranked up the Chinese meditation music again, turned off the lights and left the room, where I was to chill for 25 minutes while my qi moved. It was not unlike the final savasthana in yoga when you lie in corpse pose and realign your body while the yoga settles in. If you have ever tried to be still and just lie somewhere for that long, you know how wiggly you get after a few minutes. We're not used to being still with ourselves. Now add in needles sticking out of you and imagine how much harder it might be. 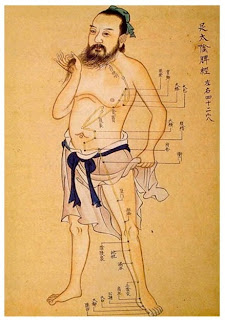 In actuality, the time passed quickly. My mind and body were buzzing and I felt especially awake and peaceful and calm and not bothered or stressing about the million thoughts of things I needed to do that day. She came in after the alotted time, "unplugged" me, so to speak, and told me to get up slowly and take care all day, seeing as I had just had a medical procedure. I definitely felt a strange mellow punch-drunk kind of open feeling for at least 2 hours or so; kind of light and airy and fluid and clear-minded in an admittedly hippie-dippie kind of way. The qi was moving, yeah baby, yeah.

Based on the deficiencies we'd pinpointed earlier, she gave me a tincture-like bottle of Chinese herbs carefully mixed to address the certain things I'd wanted to improve in my body and my life. I've been taking 20 drops in room temperature water for 2 days now, and the effect has been remarkable: I feel calm and more positive and centered than I've felt in months. Granted, much of this may be a placebo effect at this point, but we'll give it time and see what happens. I'm going back again next Tuesday, so I'll give updates accordingly if the qi keeps moving.

I will say that my yoga practice that night after the morning's appointment was phenomenal. Loose and easy and strong and calm and so flexible. I'm told this is not unusual. Overall, I was struck by the doc's immediate ability to connect what was going on in several systems in my body with the emotional terrain of my life. Like, creepily so. An example: I've had some cancer scares in the last year (long story short, don't worry, things are ok) related to my skin and lymphoma and shit. Freaky shit. So, turns out that in Chinese medicine, the heart is related to joy, the spleen to the intellect, the kidneys to fear, the liver to anger, and the lungs to grief. Obvs. grief has been a big part of my life since losing my father. And, get this: turns out that in Chinese medical theory, the lungs open up into - ba dum dum - the SKIN. Hello. Holy wisdom. So unresolved grief = lungs = the skin. Wow.

And that's just one little example of the way TCM melds emotional and spiritual theory with physical manifestations. I came home late Tuesday night and read everything I could about this shit. It's pretty phenomenal. The Taoist emphasis on balance has always fascinated me and this is an extension of that. I could go on forever, but will leave it there for now, and say, if you have a chance to do some acupuncture, definitely give it a shot. Mine wasn't covered by my health insurance, and I doubt most peoples' would be, but if you can swing a session, I'd say, get in there NOW.

Here's a great website I found with extensive resources to get you started on TCM: www.shen-nong.com
Labels: bodies cool hippie shit health taoism

Bacon Dad said…
"I walked in and we covered the basics, and then settled into a 'why are you here?' conversation that involved my health history, emotional status, eating and exercise habits, and whatevs. You know, all that shit the Western doctors really don't care about or have time for."

You've been going to the wrong docs, I think. My GP (he's a "family doctor," so Sarah and Charles see him too) definitely asks those kind of questions, particularly when it comes to how my actual habits and behaviors affect my health. Some doctors do suck, though; my last GP was kind of a douche. I went in for back pain, and without even examining me, getting an xray, any of the usual doctor shit, he just sends me to his inhouse chiropractor. Lame.
January 31, 2008 at 6:13:00 PM PST

Mariah said…
That. Is. Awesome.