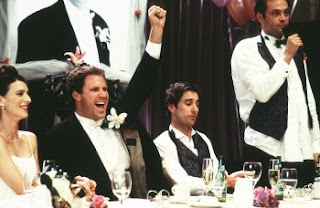 Ok, can we talk about a few things, please?

First of all, Katharine McPhee (of American Idol runner-up fame) sat at my bar tonight. Random. Girlfriend is lovely, doe-eyed, but a kind of ghastly pale, as well. (BTW, she has good taste in wine - points for that.)

Secondly, um, Vince Vaughn. So apparently Vince has been in town filming some cheesy new romantic comedy with Reese Witherspoon for the last few weeks. I have, of course, been watching patiently out of my peripheral vision for his strapping 6'5" silhouette to stroll into my bar so that, according to my carefully thought-out plan, he can then sit down, swoon with adoration and sweep me off to LA where I can be his paramour and spend the rest of my life churning out leftist propaganda while he makes the occasional blockbuster with Owen and Luke. Any day, now, really, I guarantee it.

But in the meantime, I picked up the DVD of - wait for it - "Old School" over the weekend. Yeah, I know. There was a time in my life I wouldn't have even considered wasting two hours of my life on that shit. And I would've told you so, in more explicit words. But now, I tell ya; I don't know if it's the aging or the mellowing or the chemicals in the water, but I fuckin loved it, loved Luke and Will and the bad cliched pathetic crass jokes and the Peter-Pan-Syndrome crap and the predictability and the gratuitous physical humor (uh, Will Ferrell doing rhythmic gymnastics, anyone? Or, uh, all of them busting out a Pomalink-esque dance routine on the basketball court? To die for). 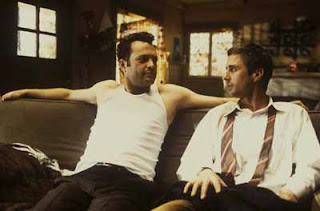 But especially Vince. I don't know what it is about the guy: his looming height, his cynical satire, his confidence, his sharp delivery, who knows; but the dude is All Man, and I can't get enough of his films. Even the half-assed shit, of which there is a lot, of course: Dodgeball and Wedding Crashers and Starsky and Hutch and the like, all of which I somehow feel I shouldn't really enjoy (not exactly heavy intellectual workouts going on here, people), but I'll be damned if I don't find them to be so smart and clever and astutely socially perceptive in spite of their shallow facades. Especially in Old School, with its uptight joyless women aching for suburban dystopias (hello, world!) who long to tie down their prey and keep their men sober and bored and chained to white picket fences, I can't help but identify with the thirty-something masculine desire portrayed here to break away from that handcuffed life and be loose and easy and laughing and just fuckin not so concerned with wallpaper and breadmakers and all of that bourgeois domestic shit. And I think that really is the social critique that lies at the heart of the film and of this genre in particular.

And how can you not love that? Add Vaughn's iconic "Swingers" role to his turn as Wayne what's-his-name in "Into the Wild," and that's it. Signed, sealed, delivered.

Anonymous said…
Thats so cute Katharine at a bar and just running into her like that. I would die if I ran into Ms McPhee like that. I would be so nervous I wouldnt know how to go about making conversation with her, flirty.
January 7, 2008 at 9:08:00 AM PST