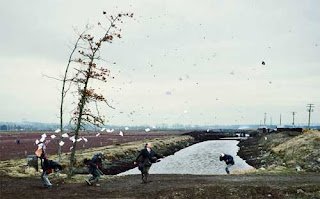 Last night the storm broke just long enough for me to march downtown to the MoMA for a quickie. There are three big exhibits closing in the next several weeks that I've been meaning to catch for months now, and the moody weather made an easy excuse to stop in.

(Um, also, I wanted a reason to wear weird shit and a floppy hat and red lipstick and pretend at bohemianism.)

So I stomped into the lobby in my tall old Pippin hooker boots and the first thing I saw was a black ceiling fan suspended from the high ceiling by a single cord, pummeling itself around the space above our heads, propelled solely by its own momentum. Two feet taller and I would've been smacked in the face. It's part of the Olafur Eliasson exhibit, which is a whole sensory experience unto itself, all sounds and smells and strange materials blasted onto walls and set up haphazardly in the middle of rooms.

The Jeff Wall photography exhibit was the one I've been itching for most, though, so I headed there first. Wall is a Vancouver-based artist who marries the feel of cinema via the use of backlighting, etc. with the look of photography, painstakingly constructing images that look as though they've simply been shot by a camera but which in fact take hours, sometimes days, to put together. 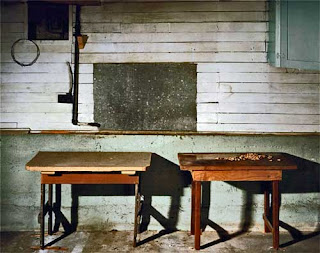 Wall's works are huge, spanning whole walls, and they're bleak and desolate in quiet yet vivid ways. My two favorites were "A Sudden Gust of Wind (After Hokusai)" (above) and "Some Beans" (right). "Wind" (1993) is inspired by an old Japanese drawing (hence the "Hokusai" in the title). Wall often uses literary and artistic predecessors as inspiration for the worlds he builds (as he does with Ralph Ellison's character in The Invisible Man).

"Beans" (1990) reeks of the 30s to me, all Art Deco blues and melancholy lighting and minimalist energy. Wall has a parallel work - same shot, minus the beans - with an octopus sitting on the other table; I love the juxtaposition of the absurd with the base in these two pieces.

Joseph Cornell is the other major artist featured right now. Cornell was a mid-century character: Surrealist (a la Dali), totally introverted, reclusive, really, this collector of small treasures who put them together in shadow-box type pieces and curiosity cabinets. His works hum with themes of nature and death and beauty, a strange mix of spirituality and celestiality in the midst of material and found objects. His "Hotel Eden" (1945) is here to the left, and "Tilly Losch" (c. 1935) to the right. 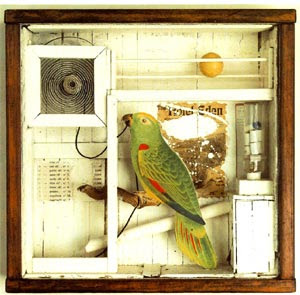 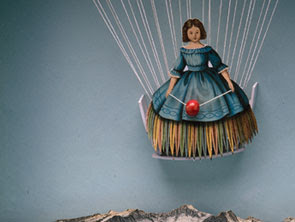 Bacon Dad said…
That is exactly the kind of photography that makes me wish I knew what the fuck I'm doing with a camera in my hands.
January 6, 2008 at 11:27:00 AM PST