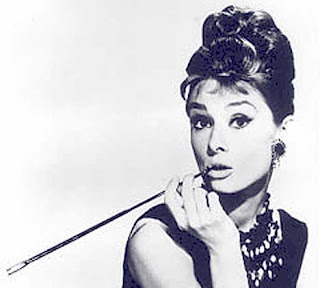 I had occasion this week to revisit an old "friend" of sorts.

It's still been so cold, you see, and the heater's kicking constantly, and the house is still cozy with remnants of the party decor (white lights vomited up everywhere you turn), and I've been feeling quiet; my annual big social blowout being taken care of, now all I want to do is be still. Yesterday was the winter solstice, you know, the shortest day of the year, and I was just reading an article the other day about what a "yin" time of year this is, the perfect time for drawing in and reassessing, being quiet and dark and mellow, and how ironic it is that instead we imbue this time of year with so much pressure to be "yang" and on and wild and vibrant and festive and partying and what-have-you.

So anyway, indulging that yin side, for sure. And as part of that pull, I wandered down to the mom-and-pop video place around the corner (Netflix be damned) to find a few classics to lose myself in. I've been craving a revisiting of Breakfast At Tiffany's for some time now, so that was an easy choice.

I first saw the film as a teenager, I think, probably on the heels of My Fair Lady-induced Audrey Hepburn adoration (always been a huge fan, must say, and don't even get me started on all the Unicef shit she did toward the end of her life). But I think I was mostly struck by the chic urban 1960s fashions and captivated by my Midwestern adolescent dreams of being a swinging girl in the City (and look where we are today!). Then, when I was passing through Zurich a few years ago I picked up a worn paperback copy of Truman Capote's original 1956 novella and fell into it with zeal; all of my memories of my subsequent days in Venice are colored with Holly Golightly and pastries at dawn in front of Tiffany's.

The book has a sharper edge, however, and sadder valleys; Hepburn's fluttering naif is more of an out-and-out whore, she gets pregnant by her Brazilian lover, the Paul Varjak character nurses a largely platonic and unrequited love for Holly, and the ending is much more open and uncertain and frankly, quite melancholy; instead of returning to one another in a rainstorm, Holly jets off to Brazil and is never heard from again, while Paul is left with his lonely heart and his memories in Manhattan. Sigh. Rich stuff. 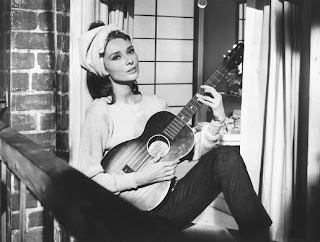 So I watched the film again this time around a wizened old woman of 28, and saw so many nuances that I had missed as a teenager. There is so much sadness in the portrayals; there are rich beats full of implied emotions, there are looks caught by director Blake Edwards' camera that take your breath away, there are little moments (like Peppard throwing away his cigarette in the utter frustration of unrequited love) that are positively brilliant little encapsulations of the character struggles going on here. George Peppard in particular received quite lukewarm reviews for his work here, but I found myself constantly pulled to certain reaction shots of him brimming with sorrow and frustration and heavily-laden emotions where a casual viewing might simply miss those things.

Point of all this rambling is: wow, what a film. Problematic in many ways, of course (hello, seriously racist Mickey Rooney "yellowface" performance that really isn't even worth the breath to discuss, it's so off-the-charts wrong), but so quietly rich in the others. The aesthetic minimalism and beauty of the scenery, the locations, Hepburn and Peppard themselves, and the fashions; the iconic Mancini score and the unforgettable "Moon River" motif running throughout; and the surprising ruminations on belonging, loneliness, alienation, and despair. I have always loved Holly Golightly for refusing to belong to anyone, even her cat; for refusing to name her cat, because she doesn't believe that people or things belong to one another; for being a nomad and a wanderer and someone looking for more than her little Lulamae Barnes existence in Tulip, TX; and for her pragmatic realization of what it takes to get by. And for looking so goddamned smashing in the process.
Labels: books cinema fashion