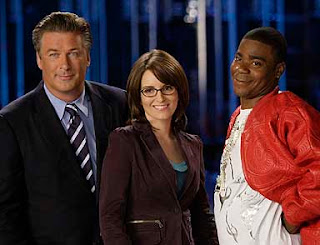 "Tracy, I don't believe in soulmates. I've worked too hard to get where I am to sacrifice it for some woman. I don't care if she IS beautiful, brilliant and she does it like her dad's a minister."


Best laugh of the week.

If you don't watch 30 Rock, you should. Secret vice. It's fuckin hilarious. Smart and way-lefty and fast-paced and helmed by Tina Fey. Almost too clever for its own good. Thursday nights on NBC, or watch it online, which is much easier. Go. Now.