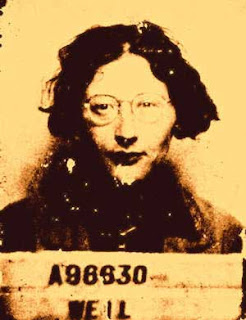 And somehow, it's almost December.

Spent the last several days buried in research, poking my head up now and then for a bowl of ravioli (decidedly NOT raw) or an unexpected phone call. I've got a shadowy little office tucked into the back end of our place, just off the balcony that leads to the fire escape, and if I swing the door open to let some fresh air in and curl up at my desk and block out the giggling of the sorority girls upstairs I can lose a good several hours. It's darker back there, heavier, somehow; I've got another desk that sits in the front bay window overlooking the street, sunlit but shaded by the one big tree on my block (all mine, thankyouverymuch), but when I actually get settled in there to write, it's useless; the people passing underneath and the conversations wafting up and the lights of the traffic whizzing by eliminate any hope of productivity.

And it's productivity I've been after. Stumbled into Simone Weil (thanks, Annie Dillard) and have found in her this eccentric brilliant fascinating creature of a woman. Early 20th c. French philosopher, mystic, anarchist, pacifist, Marxist, radical, respected philospher idolized by Camus, among others - and all before dying at the age of 34, of self-induced starvation, in England. WTF. The more I read of her stuff, the more confused I get about this complicated and introverted ascetic child of well-to-do Jewish agnostics who fell into St Francis of Assisi and fought in the Spanish Civil War and what have you.

Her key themes? Suffering, absence, affliction, the spirituality of work (see why Marx fits in?). Detachment, class activism, beauty as soteriological (!!!). Stillness and soulfulness and the notion of uprootedness. You get my drift. Totally intriguing. And yet - all before 34 y.o.


The age thing is what's getting me most. It's been a rather "yin" last few weeks, you see; a lot of sorrow and death and silence and drawing in, reflection, as tends to suit this time of year anyway, with its cold evenings and crisp mornings sans fog. Lost an old friend, a dear friend, aged 29, to a ravaging and wholly unexpected brain tumor, and it has shaken me; Dave and I went to college together, he was my fellow sociology dork, the only person I knew who'd stay up till 2 am talking about dead German philosophers, and he and I had kept in touch across the years and across the miles as we both went our various ways. He's gone now, two months after a diagnosis; won't see his thirtieth birthday, won't see his first wedding anniversary with his young wife, now a widow. I found a few old emails from him from 2003, full of hope and passion and anger and wrestling with the questions of what to do with his life; and in that moment, he had three years left, didn't know it, but only three birthdays, three Januaries, three springs turning into summers.

So Dave's gone, and Simone Weil lost it at 34, and it's late autumn and the leaves are turning and my father's would-be birthday came and went last week, and here we are carving turkeys and hanging holiday decorations and watching the seasons turn once again without any kind of awareness of how wild and ridiculous and obscenely gorgeous it is to have the chance to see one more Christmas, to have the ability to plan for one more New Year's at the beach, and Buddhism reminds us to step back, take a deep breath, inhale, smell the pine in the air, feel the twilight fog on our cheeks, and stop craving, stop wanting, stop wishing to be somewhere else with someone else doing anything else but exactly what and where and who we are right now. To let it be enough, just for today, just for this moment.

Because it has to be.

and thankyou for the thanksgiving card, really thoughtful. im going to try really hard to send greetings out this holiday season.
November 29, 2007 at 11:55:00 AM PST