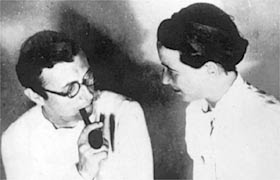 Feels like winter here today. Usually the fog burns off by noon or so, but not today; today was all mist and wind and chill. Kind of fine with me.

Wandered into one of my favorite independent bookstores over on Fillmore on my way to do some writing, and found, somewhat serendipitously, a copy of Simone de Beauvoir's letters to Sartre plopped haphazardly on a shelf. Dishy stuff, I tell ya. If you don't know philosophy, well, these two were like the Bill and Hillary of mid-century existentialism. Brilliant, charismatic, driven, inspired, sexually deviant, although much more anti-bourgeois than the politically savvy Clintons. Pretty much the poster couple for models of alternative love that subvert the traditional bourgeois nuclear family set-up. Granted, they had their drama, but their famous "open marriage" agreement left mad room for intellectual vibrance and subversive sexuality and all kinds of badass deviant shit, usually featuring triads and youth and all kinds of illicit mystery.

The New Yorker had an interesting treatment of the whole Sartre-Beauvoir love triangle a few years back. Once you get past what is essentially a list of lovers, it does offer some thought-provoking ideas on what the years have come to reveal about their relationship. You can find it in their archives here: "Stand By Your Man: The Strange Liaison of Sartre and Beauvoir"

So after picking up a few new reads, I popped into Shabby Chic next door to check out some pillows I've been dreaming of [speaking of annoying bourgeois domesticity...guilty as charged]. On wandering in, I heard a strangely familiar voice, and looked up to the balcony upstairs to see a pretty dark-haired woman carrying a bright-eyed infant in a blue sling across her chest. A double-take later, I realized it was Keri Russell, of recent "Felicity" and "Waitress" fame (and, more importantly to those of us who had a daily after-school date with the Disney Channel circa 1990, a former MOUSEKETEER!!!). Anyway, Felicity was hanging with her seriously hippie-sexy baby-daddy and spawn, picking out something or other and chatting about sending it back to New York. She's tiny and beautiful, he's a granola dreamboat, and the kid is destined to be gorgeous. Plus, he's named River. Geez.

Funny reminder that, oh yeah, I live in a sweet city where random celebs can blend in and people do actually leave them the hell alone. That said, if they'd asked me to babysit, I definitely wouldn't have thought twice before saying yes.
Labels: books existentialism menage a trois mouseketeers on fillmore sexy intellectuals