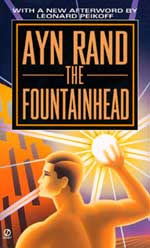 For several months now a few of my [smart and fabulous] friends have been passing around worn copies of Ayn Rand's "The Fountainhead" and "Atlas Shrugged." This has not resulted in my own carrying around of a 1200-page capitalist screed, because I am not a fan. Waaay too pinko commie to appreciate the rationalist, self-oriented philosophies of Ms. Rand.

It's an interesting article and points to the fundamental lack of attraction I feel for her stuff. Also, it appears in the Business section. Bleh. First clue that it's not my style. But secondly, it cites all kinds of CEOs and Vice Presidents and other oh-so-important people in the business sector who've found inspiration in Rand's work. Ugh. At the same time, I'm awed and motivated by the fact that what was an initially very poorly-received body of work has resonated so widely some fifty years later. Literature is indeed powerful, in spite of what the rationalists have to say about that.

Anonymous said…
i completely agree with your dislike for the ultimate message (and the scary groups surrounding the rand legacy) - but im pretty fasinated by the power these books have had, and also know that i felt really captivated when i read them (ages ago). its amazing how literature can sweep a person up and has the potential to shape their morality so strongly (as the nyt article describes). i also think, as a pinko commie, its really useful to read atlas shrugged in particular, to address this alternative morality, understand, critique and choose against it. the images and story of that book are really lasting. I actually think you can (i'll even dare to say should) come away from atlas shrugged with something much more interesting than the two false choices, and find a true liberal (as in free in the amartya sen conception of freedom) economic philosophy. sorry to blabber on but i find this topic and this book particularly fascinating!
September 19, 2007 at 4:16:00 PM PDT