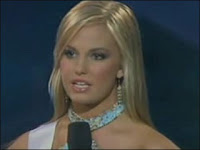 The NYT has an article this morning about how a number of Miss America "scholarship competition" winners have struggled to collect payment on the big bucks they're promised for being, uh, "beautiful" and "talented."

The whole thing feels vaguely silly because, well, no offense, Miss Five Boroughs New York 2004, your favored means of procuring fame and fortune is, how do I say this, OBSOLETE. It's mindblowing to me that this shit still goes on; reading the article, I mean, it's no shock that the largely volunteer-run pageants (driven by crazy big-haired stay-at-home moms from Texas) are struggling to fund themselves and closing their doors left and right. We've watched the TV broadcast being shuttled from shitty network to shitty network over the last few years, and still, no one's watching, and maybe, just maybe, that's because a horse show that judges candidates on their swimsuit appeal and the straightness of their teeth isn't really relevant in the 21st century? Just a possibility.

You saw the mindless debacle that was Miss Teen South Carolina flubbing her mindbender of a question about kids and maps and "the Iraq, such as," and isn't that proof enough that blond 14-year-olds need to spend less time gazing into the mirror and more time reading or doing fractions or studying Swahili or something? Sigh. Inasmuch as feminism's "over" and it's all about equality and blah blah blah, I'm still seeing a culture that values that bland empty-headedness over the supposed brains it takes to get into Wharton or whatever it is this beauty queen profiled in the above article is doing.

The ironic thing is that these chicas are so done up in this caricature of what it means to look "beautiful" that they end up looking exactly like the drag queens I run across on early mornings heading to yoga through the Tendernob: parodies of femininity. Plucked eyebrows (natch) and dyed hair and fake boobs and zero brains. WTF.

Anonymous said…
Flashback to the 80s when we used to rush through our showers to watch pageant broadcasts with ice cream, rooting for Miss South Dakota who rarely cracked the top ten (I can't say never, because once she did).
b
September 24, 2007 at 9:05:00 PM PDT