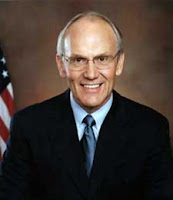 Salon has a sharp article today that gathers the various recent stories of Republican hypocrisy and lays them out in what appears to be a rather straight-forward (no pun intended) position. The author, Joe Conason, has collected a sort of laundry list of all the blathering hate-mongering Republican figures who've been outed in the last several years (including figures like fundamentalist preacher Ted Haggard) and muses on why we keep seeing this strange phenomenon of the Republican closet. He writes of "a conga line of right-leaning queens" that just keeps on coming, Foley and Craig being two of the most recent of these.

It's a good start to a question that seems ripe for further analysis. Reading the article, I found it ended much too quickly. This whole pattern seems to me to scream out a few of the key issues in the conservative movement that are long overdue for being highlighted as problematic. The first of these is, of course, the general anti-sex stance of the Republican party. It's not that the Democrats are necessarily any better, but the Right - founded and fueled so intensely by a supposedly faith-based abject fear of sex - roots so much more of its agenda in anti-sex stances: anti-choice legislation, anti-birth control, anti-sex ed, homophobic opposition to gay marriage, etc.

At this point the connection between the mass sexual repression/denial in the Republican party and their bizarro opposition to anything sexually progressive seems too obvious to be ignored. It's getting ridiculous. No wonder these guys are trying to shove through so many ass-backwards laws (such as repealing abortion rights, limiting birth control, etc.) - they are so fuckin afraid of anything to do with sexuality (especially their own) that they just try to stuff it into a corner and time travel back to Victorian-era America.

Get it together, guys. It's one thing to be out of touch with yourself sexually, but it's another when you use that repression to impose fucked up reactionary legislation on an entire country.
Labels: christofascism frustration politics red states sexuality