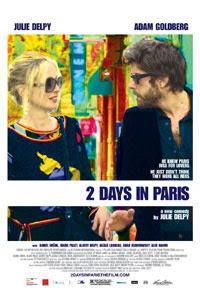 Anyone with a heartbeat had to've been mad about Ethan Hawke and Julie Delpy after seeing them in the Richard Linklater films, "Before Sunrise" and (especially) "Before Sunset." If you haven't seen them, shame. Two of the best films of our generation. Hawke and Delpy were credited as co-screenwriters in "Sunset," so it's no wonder that Delpy's directorial debut (which she also wrote, edited, produced, scored, starred in, and cast her cat) is equally excellent.

Everything Delpy does reeks of bohemian style and juicy political fervor. I kind of just want to be her. "2 Days in Paris" (not to be confused with the similarly-titled Paris Hilton sex tape) hit theaters here on Friday. I'd been reading a number of previews on the piece after its debut at a few film festivals and looking forward to another rambling walk along the streets of Paris. This one, accompanied by Adam Goldberg instead of Ethan Hawke, feels a little more coarse, a little more chaotic, a little more earthy, and I like that. Goldberg's new to me, and he is surprisingly sexy in a strangely Ben Stiller kind of way - the tattoos and sunglasses and blues and blacks are really working for him. No surprise that I appreciated the consistently polemical anti-Western and anti-American bits in the movie, I suppose; reviewers are comparing it to "Annie Hall" and "Meet the Parents," and I can see both comparisons, but it's a rather more edgy and farcical version of the two, minus the annoying quirks of Diane Keaton and Woody Allen.

Some people might leave the theater wondering what's the point of a film about 2 people spending 2 days in Paris, eating dinner, chasing a cat, going to an art gallery, attending a hip Parisian house party full of ex-lovers and cigarettes. I have to say, I love these small movies; the ones that don't purport to hit on enormous existential truths epic-style, but that sort of slyly hint at those little moments of life, the fights and the accidental run-ins with old acquaintances and arguments with cab drivers, that color our lives.

It's a small film, but it's Paris and it's art and it's Delpy and Goldberg wearing fabulous sunglasses as they argue along the Seine, and Delpy's counterculture father keying cars and her boho mother sleeping with old rock stars, and I'll take it over some overblown three-quel anyday.