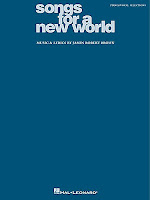 Floods in Minnesota (B's wading through her basement, six inches deep) and hurricanes in the Yucatan, and it's a still, starry night here in SF. Strange to think there's so much tumult out there when everything's blue skies and quiet here, even in the City. The clear days mean wispy fog fingers twisting over Nob Hill once the sun sets.

So the good - no, great - news is that I ended up getting that show. Found out just a few hours after the audition. The soprano role, several good songs that fall right in my sweet spot, just the right range and feel for what I'd like to be singing, and a lot of badass tight harmonies to wail on, as well. It'll be a quick 5-week rehearsal period, banging out the show so that by the first weekend of October it'll be all over. I am less concerned about whether anyone actually sees it, and more just thrilled to get my voice back in shape and solidify some connections in the Bay Area theater community.

(Oh yeah - the show is Jason Robert Brown's "Songs for a New World." Off-B'way run in '96. A solid predecessor to his bigger hits, "Parade" and "The Last Five Years.") All I can say is, it's about goddamned time.

It was a busy weekend here, nonstop going, and today was a breath of fresh air, lots of coffee and reading and quiet catching-up. I don't like August, never have; something about it will always mean humidity and severe weather and sticky vinyl car seats and the looming dread of an approaching school year and the last wheezing days of summer. It's all that ugly 1970s goldenrod color in my mind. Will be glad to move on to September and the opera and ballet seasons opening and the leaves turning (yes, even here) and the excuse to live in cloche hats and scarves again.**

September will bring with it a new revival of "Sweeney Todd" at ACT, and "Avenue Q" at the Orpheum, and "Samson and Delilah" at the SF Opera, and "The Drowsy Chaperone" to follow, and sheesh, endless music. I'm glad to be doing some of the singing myself again now, because it was getting to the point where I couldn't even sit through a show without getting itchy to be doing it. Now I can enjoy these guys without wanting to smack the leads.

By the by, did you see the middling review in the Times for the new B'way cast of "Grease?" Seems the TV stunt-casting didn't do much for the spirit of the performers.

Also, for the random record, what was a burgeoning developing crush on SNL's Andy Samberg has officially reached full-blown status. And no, it's not just because of the big wild curls. Well, mostly, yes. But it's also got something to do with the fact that a) he's from Berkeley, b) he's absurdly hilarious, c) the big wild curls, d) "Dick in A Box," e) the NOW shirt he wore to the Spike Awards, and f) the big wild curls.

Just sayin'. In case you'd happen to run into him. Don't let him cut the hair.