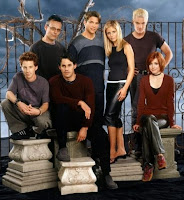 So the morning news says Rove is stepping down. Let the lame duck period of the Bush regime set in.

Saturday marked the 4th anniversary of my move to San Francisco. Aww, sentimental. Feels like no time has passed since hauling out my little Ford Festiva loaded down with all my worldly possessions and chugging slowly, lumberingly, up Nob Hill for the first time.

The sparklingly sunny afternoon at AT&T Park yesterday didn't help the Giants avert a sweep from the Pirates. Zito was off, in spite of being oh-so-on in his little black socks and furrowed brow, if you know what I mean. He must've been distracted by my presence. Yeah, that's it, definitely. Bonds hit a foul ball and it landed smack...on his mother's head. Now that's aim.

"Avenue Q" opened here over the weekend. Looking forward to catching it, even though I'm a few years overdue.

Friday night found a few hammered D-list stars from the old TV series "Buffy The Vampire Slayer" at my bar. Wikipedia tells me one of them "voluntarily entered rehab in April 2004." Oh god. Guess that double Patron margarita wasn't on the 12-step program, eh. I'm glad I'm not famous, or a drunk. Dude was weeping over his tequila. Maybe fame isn't all it's cracked up to be.

My yoga studio's having a visit this weekend from one of the top raw gurus, Brian Clement, based in Florida. I'm hoping to learn a few new things. Next on the list: getting better about raw "uncooking," aka preparing foods like lasagna, enchiladas, etc. minus all the cheese and oil and flour and shit. Cupcakes over the weekend reminded me how much I love baking...but I'll be damned if they aren't so awful for you. Time to learn how to "bake" something good and rich - you know, kale and jicama and flaxseed and all that good shit.

Melons and heirloom tomatoes are so in season right now. I'm swimming in them. Buy some. Eat with the seasons. Your body will thank you.
Labels: i left my heart random

Anonymous said…
You will LOVE Avenue Q. Be prepared to laugh loudly and often and to witness puppet nudity. The music is upbeat, hysterical and honest. You won't be able to get it out of your head and that's a very good thing. :)
August 14, 2007 at 10:34:00 AM PDT