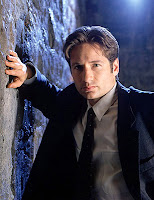 Sitting here at home watching the Giants play and waiting for Barry to hit #756. Gotta say: it's so great to be home in the evening, I can't even describe. If I'm not bartending at night, I'm usually out for one thing or another, and wow, it feels weird to be here.

* that David Duchovny has a new series on Showtime this fall? We're somehow still managing to get illicit free cable, but I don't think Showtime's included in that. B, I know you're feeling this career return, too. Too long since Fox Mulder graced the small screen, fer sure. Be still my heart.

* that Tim Lincecum is, like, 12, and he's completely rocking it for the Giants right now? Little Big Ears pitched 7 innings tonight and was damn solid.

* that Rudy Giuliani's kid is a democrat for Obama? Is that dishy or what?! Almost as good as Cheney's kid being a lesbian. Funny how these Republican daddies turn their kids off from the elephant party. You don't see Chelsea voting for McCain. Just sayin'.

* anything about the composer Jason Robert Brown? Apparently I'm late to the game, because I just picked up the score and the original cast recording to "Songs For A New World," and I like what I hear, so far, at least, even if it is a little bizarrely Christian folk rock-ish at points. B's told me good things about "The Last Five Years," and I know "Parade" is supposed to be good, but this guy's only just come under my radar.

* that I should get a crystal ball? Don't know what the buzz is in the universe right now, but I've been mad psychic lately (don't ask, just go with it) - moreso than usual. I've always been my own little Magic 8-Ball, but don't usually mention it because it makes me sound craaazy. Something up with the moon er what?

On top of that, my bar was graced by a couple of smokin' hot Giants pitchers Who Shall Not Be Named (but whose progeny I would definitely bear) as well as the former mayor of SF, Willie B., always a pleasure to run into because he is just so unapologetically himself. Hopped on the #1 California bus up Nob Hill one day a few years back and was shocked to find myself face to face with him. Gotta give the guy props for making an effort to at least look like he's hanging with the little guys, even if his driver is waiting at the end of the line.

Um, and that's my wildly scattered, pointless but obligatory post for the evening.

Anonymous said…
I read in a DD article about this show that they are supposed to start shooting the new xfiles movie by year's end...I am ready!
b
August 7, 2007 at 9:16:00 PM PDT