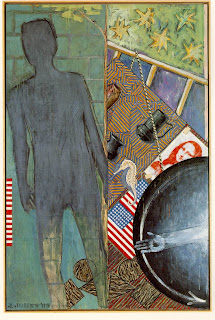 So the patriots' holiday looms and every store window is blanketed in red, white and blue. I'm muttering under my breath as I pass by the buntings and the flags spread seemingly everywhere, even in this hedonistic city. And the week makes me think of two artists: Jasper Johns, the painter, and Edward Albee, the playwright.

This is Johns' "Summer," painted 1985 in his collection of the Seasons. He's famous, of course, for his variations on the American flag, but I prefer this one for its inclusion of his own shadow and the Mona Lisa, recurring motifs in his work. The SF MoMA included this piece in the Picasso exhibit earlier this year. I'm glad for the juxtaposition of the dark with the eternal perkiness of the flag.

All the patriotic gusto this week has me fleeing to memories of an article I read some years ago in the Guardian, an interview with Edward Albee about one of his new works (he of the famous play "Who's Afraid of Virginia Woolf?"). Albee's always been fearlessly edgy, which I admire; I scribbled down a piece of something he said back in 2002 and it remains on my wall. In the article, he described his work as "an examination of the American Scene, an attack on the substitution of artificial for real values in our society, a condemnation of complacency, cruelty, and emasculation and vacuity, a stand against the fiction that everything in this slipping land of ours is peachy keen."

I fear that holidays like the 4th let us slip too easily into that complacent self-celebration, allowing us to cease to wonder whether this quagmire that is spreading American-style globalization can be averted. And I am reminded of something that theologian Matthew Fox once wrote: "There are no nations." Four simple words. No nations. Only people separated by arbitrary boundaries that give us permission to ignore the suffering across those borders in the name of nationalism.

That is why I am no patriot.
Labels: art artificiality politics