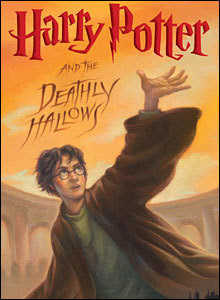 First of all, a moment of silence for my man Steve Martin, who, I've just read, is to be married (to someone who is not me). Granted, the guy's a little old, but still. A little piece of my heart (from the section not belonging to Giorgio) just shattered. Kisses, Stevie.

Also, this weekend there's something or other about a Harry Potter book or something? The media doesn't seem to be talking about this AT ALL so I'm not surprised if you haven't heard. Something tells me a lot of people's Friday night plans involve lining up at the bookstore. Which, I'll admit, is pretty fab, in spite of the fact that I have never gotten on the whole HP wagon. Not so much one for broomsticks, or wizard shit, or whatnot. Sorry. I'm sure they're great. But I'll leave them for the rest of yous to read, at least until a) I run out of all the other shit I am supposed to read first, or b) I procreate and need to read them con mis ninos.

Yesterday I read an article (don't remember where, sorry) that predicted that by 2015, 75% of the US would be overweight, and 41% obese. Ay. Holy health crisis. Just when the boomers are all really hitting old age. And, shit - 2015 sounds far away, but we're only talking 8 years here, people! And the many-fingered epidemic rolls on...and people still aren't putting the puzzle pieces together, about Doritos and hot dogs and macaroni & cheese and donuts and Froot Loops and other plastic foods not meant for human consumption (but oh man, why do I have to love Ho-Ho's so much?).

So, that in mind, it's off to yoga class I go again. I was itchy for yoga last week being away, and it's been difficult and refreshing to get back into my regular daily practice since returning. I've had that word on my mind lately: "practice." I remember when I started doing yoga, I hated how pretentious the teachers sounded talking about their "practices" - ugh, gimme a break. But I've grown to appreciate it - this idea that we can apply to any parts of our lives we're attempting to make strides in, this notion that we can't just pick up and do something perfectly just yet, but we can sure as hell practice at it, and some days will be shit, and others a breeze, and you just have to keep the whole practice mentality in mind as you do it. And it's true - some days I can pop into my split, and some days it hurts to even turn my head. And it applies for more: for the whole raw foods thing (ay, that blue cheese yesterday), or my ongoing attempts to Not Suck as a pianist (which the Sondheim will challenge any day), or even something as simple as practicing patience, or practicing actually picking up the phone when it rings, or practicing remembering to water the plants.

Random thoughts on this random Friday morning. Now I'm going to "practice" editing the chapter I wrote yesterday. Newest writing goal is to be at it from 8-12 every morning. So far, the practice is going ok...even though it's been more like 9-12, with coffee breaks every 5 minutes...but what can you do?

Go get your Harry Potter on.
Labels: books mornings stream of consciousness yoga

The mental image of you reading Harry Potter to little Rachies is too freaking much. I can see it now, short wind blown glamour hair and red toe nail polish for the whole clan.

Your kids better not teach my kids to swear.

Anonymous said…
Hi Rach - I read your blog because it's connected to Mariah's and I love it. Anyway - did you read that Steve Martin's wedding was officiated by Nebraska's very own former Sen. Bob Kerrey? Who knew.
August 1, 2007 at 4:10:00 PM PDT