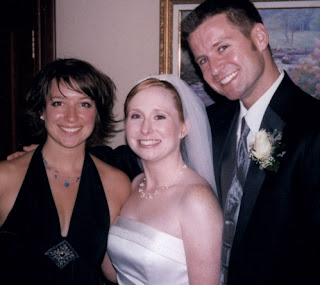 We did it! They're hitched. Aren't they smashing?

This was taken at, like, midnight, after we'd been shaking our groove thang for approximately 5 hours and 27 minutes, given which, I am shocked and surprised that the a) sweat and b) champagne don't really show. Shortly after this photo was taken, I hauled ass to catch the end of "Hey Ya" before smearing my entire body with devil's food cake.

Now, let's back up a little. Here's mom and daughter picking up the gown Thursday afternoon: 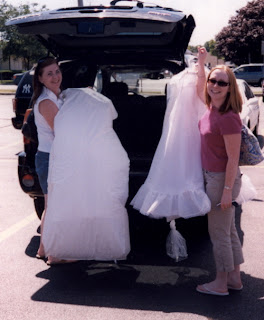 And again at the rehearsal dinner Friday night: 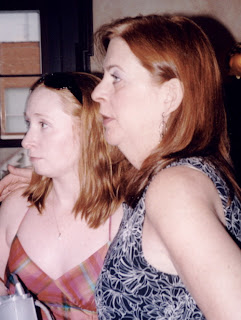 Moving right along to Saturday morning, with Meliss figuring out how to get in that big ol' car: 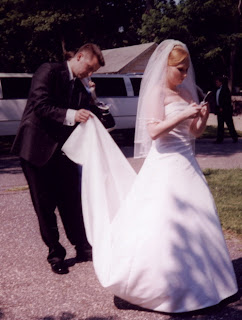 They took pics at the Vanderbilt Mansion, a stunning Mediterranean-style terrace overlooking the water: 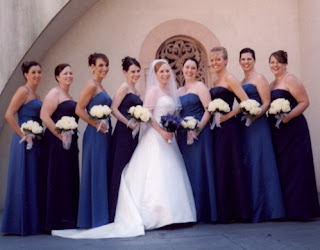 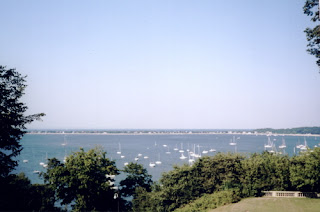 And onto the fun stuff. I don't have pics of us up there in the gazebo at sunset doin' the bizness, but that's because I was, uh, slightly busy at the time. Rest assured that it was gorgeous. Meliss, big points for the Claire de Lune (Debussy) string selection. One of my faves - heart-wrenching. And the e.e. cummings - breathtaking.

And then it was on to what we'd all been waiting for: cocktail hour. And time to hug everyone I hadn't seen in months (or years, in some cases - Tara!). We sat outside overlooking the water amidst tiki torches and willow trees. I've never been happier to have a cocktail in hand than when my spiel was over and I could stop being The Rev and start being The Rach. 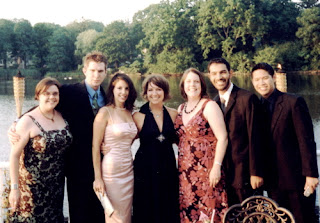 Then, not so much: 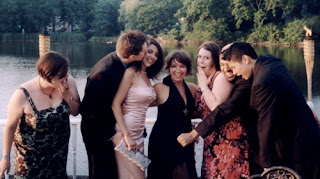 (Ped and Andy, have fun with those job searches. You saw what happened with Miss New Jersey!)

And more of the UD gang assembled: the shot for the Delaware alumni mag, with Meliss and Matt as "Double Dels" and the rest of the Newark people there that night (minus Shaun, who arrived shortly thereafter, after taking the train from Manhattan after his performance that night). 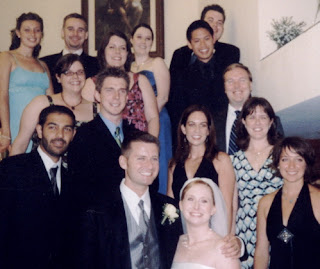 And my boys at dinner: 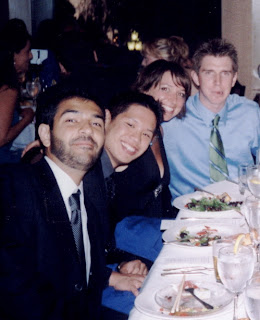 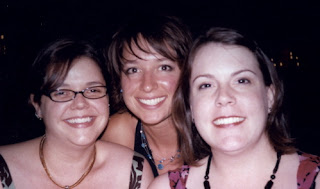 (I've deliberately cropped out the cleavage - that's ours to share, right, ladies?) 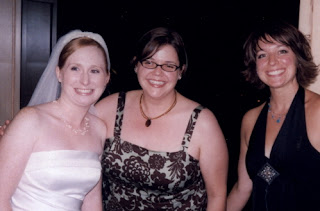 I wisely used up the film before Sunday morning's brunch, which, after being up till 4:30 singing "Cecilia," eating cold pizza and hunting down the groom, was a little slower-paced. Let's just say I've never been more glad to get on a long flight home and let the food coma set in. On the heels of two weeks or so of stellar raw action (and feeling at the top of my game, great yoga practices, even better long runs, and mad energy), all bets were off the night of the reception, with cake and cheese and all kinds of get out of jail free cards. And I am definitely feeling it today; can't wait to get to my yoga class tonight and get back in the vegan groove. But that devil's food cake alone made it worth it.

-- I absorbed more of my father's wedding technique than I realized. Felt him so near all weekend, especially in the course of the service itself. Which was a bittersweet gift. Also, it's not so hard to lead a liturgy when you know there are frozen drinks with umbrellas waiting for you when you walk down the aisle.

-- Long Island is green after all, and not so bad. Still doesn't mean I'd ever live there, but it's redeemed itself in my eyes, fer sure. And oh - those bagels!

-- Weddings are important after all; I fell back on my sociological mind long enough to see the ritual everywhere I turned, and yes, the manicures and the dinners and the dancing, they're all important, indeed, in whatever form you might find them. And when else do you have these remarkable gatherings of people you otherwise could only dream of having all together at once again?

-- Long loose dresses are fab for the kinds of receptions with sushi and spinach crepes and martinis and mashed potato bars - for hors d'oeurves alone. When in doubt: wear a gown that can double as a maternity dress! Then you can pack that deliciousness in between dances. It also makes for prime booty-shaking. And can be stuffed in your roll-on, too.

-- Never traveling Southwest again. I'll give them credit, the whole deliberately laid-back "corporate culture" thing has its charm, but ugh, I felt like a fuckin cow getting herded through those gates onto the airplane. Fuggedaboutit. It's not worth the hassle. Though it was definitely worth it to fly into Macarthur and thus avoid traffic headaches and JFK and all that nonsense. Smart thinking, Meliss.

-- Can I reiterate once more what rockstar friends I have? Every time I see you guys I'm reminded. And this time was just a cross-section of the gang...but I am constantly impressed with the number of doctors and performers and sexy badass brilliant peeps we've cranked out. The kind who are not only intelligent as fuck, but can shake it like nobody's business on the dance floor and wail at the top of their lungs in 4-part harmony at 4 am. Geez. I'm fuckin lucky.*

-- It doesn't matter where I go or who I'm with...I am always glad to come home to SF. And miss it before I leave. And the fog and the quiet of the City on a late Sunday night and the sound of the trash man this morning outside my window and the knowledge that I can head out for kale-seaweed salad around the corner, and my lilies still blooming in the living room, and my piano with Sondheim all set to be played...well, what can I say.

And that's the round-up, my friends. Enjoy the Picture Extravaganza, because that's probably it for awhile. And think of poor Melissa and Matt lounging on the beach in the Caribbean drinking pina coladas right now, and then go back to your desk, and try not to curse them too loudly.

* Um, why do you all still live on the East Coast again? Goddamned 3000 miles. A girl could go mad.
Labels: girly shit rockstar friends weddings

Bacon Dad said…
I dunno if I qualify as a "rockstar friend;" I'm more of a "skanky celebutante friend," but I figured I could respond to this:

"Um, why do you all still live on the East Coast again? Goddamned 3000 miles. A girl could go mad."

Anonymous said…
Rachel,
Thanks again for everything. You did an absolutely amazing job, we couldn't have asked for a more beautiful ceremony.

Meliss and I did have a couple of Pina Colada's in St. Lucia, but we mostly drank Bounty Rum and Piton Beer.