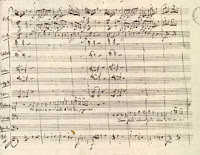 So the SF Opera opens its summer season today, and of course it's not without a little drama. The season itself is heavy on the old standbys (e.g., tonight's opening production is "Don Giovanni"), but that's about where the traditional aspects end.

The Chron has an interesting article on the fancy-ass new technology they've installed in the opera house - all kinds of flat-screens and whatnot that will make the cheapie nosebleed seats seem a little less far away. I don't know how I feel about this - I mean, obviously, it'll be great to not need your opera binoculars every time you want to catch a glimpse of a face from up there - but at the same time, part of the lingering charm of opera is its absolute lack of reliance on things like microphones (no need for amplification is the hallmark of a TRUE singer, fer sure, no matter what those American Idol kids think) and television screens. The art comes down to the orchestral grandeur and the sheer projection power of those oh-so-trained voices themselves. I feel like these screens might be kind of distracting, too...

This David Gockley guy is new to the opera from Houston as of last fall and though the last season was still not his programming, we'll see more of his tastes this fall when his choices come into play. I noticed a few novelty quirks in the direction last season that I kind of loved and kind of hated. It's undeniable that he's making some great attempts to give a more populist spin to the local opera scene, however, and for that I definitely have to give him credit.

The other buzz going down right now is that they canned the woman who was supposed to star in Don Giovanni tonight on Wednesday after the final dress rehearsal. Holy drama. (Times article here) The added bit is that she's African-American, a local SF singer, and is being replaced by a (white) South African soprano. Oh gosh. Messy. We'll see how the reviews shape up, but if nothing else, the summer season is off to a dramatic start. We've got Strauss opening later this month, so look for a review or two in the next few weeks. Pretty psyched to have the divas going at it again after a few months of quiet from down Van Ness.
Labels: drama opera