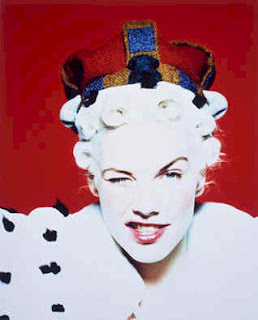 Yesterday was the first Tuesday of the month and that means one thing in Our Fair City: free museum day at several of the biggies around town. I'd already been planning to hit up the Vivienne Westwood exhibit at the de Young before it closes this weekend, so that pretty much sealed the deal right there. The place was definitely busier than usual, teeming with blue-hairs and starving art students, but in spite of the noise and the hubbub I kind of secretly liked it. It's nice to feel like there's actually life at a gallery now and then, a place where people gather, instead of some silent white-walled chamber where people are afraid to step too heavily lest it disturb the sleeping gods.

Anyway, so I ambled down toward Golden Gate Park wearing my best crazy-black-feather-boa'd-red-lipped artist ensemble (love those days, mmm). The de Young sits right by the Japanese Tea Garden, an imposing copper building with great outdoor patios and courtyards inside. The place has garnered raves for its architectural brilliance and I could instantly see why. When you're in the museum itself, you're constantly coming across little corners and coves where the light shines in, where you're suddenly overlooking a courtyard, where you're hit smack in the face with a tree branch that looks like it's so close you could touch it. There's a great wall of windows that overlooks the terrace and the sculpture garden, too. The ultimate effect is that instead of feeling trapped in a museum, you are constantly reminded that you're nestled in the middle of a vast park and you've just stepped inside for a moment. The light and the trees are as much a part of the experience as the art. I love this.

And while I'm on the topic, the cafe is stellar, as well - v. European, great food, excellent veggie selection, stylish, sitting in a big open airy space that opens up onto the terrace for outside seating. I inhaled a killer veggie hummus wrap out sitting in the middle of the sculptures in the sun and the wind and watched the little kiddies spinning around the art pieces out there. It was pretty much heaven. Great coffee, as well.

Anyway, onto the art itself. The collection is varied and not necessarily my favorite; the modern art corner was definitely the highlight for me, with several Diebenkorns and Thiebauds, a great Ruscha and a decent selection of Beat artists, along with some edgier new stuff and a cool Kiki Smith hanging installation. 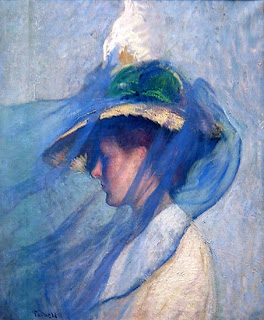 Other than that, they've got a big collection of Arts of the Americas, lots of clay pots and shit from 800 B.C. that honestly don't do a lot for me. The pre-20th c. American art is good, lots of landscapes and whatnot, interior decor as well, but again, I kind of breezed through that. The real gem for me was the Westwood exhibit down in the basement, which is moving on to the rest of its world tour after its only stop in the U.S.

Gotta say, Westwood's stuff made me just want to whip out the sewing machine and sew frills and buttons and weird shit onto everything I own. Her style is so ensconced in parody, completely whimsical and yet punk, very political, very aware of the role that clothing plays as "personal propaganda," so to speak. She and her various co-horts used so much historical and literary and artistic influence in creating their shit - I really understood the deliberacy of her designs on a much clearer level. She's hip now, very mainstream in Hollywood and whatnot, but the power of her legacy is definitely more that of the British Punk scene of the early 80s, a lot of the black and the rubber and the phallus-shaped buttons (yes, a whole line with phallus-shaped buttons) and the mini crinis and whatnot. Subversive and fun and historically informed, all corsets and sauciness and playful subversiveness. The message being - stop taking yourselves so goddamned seriously and lighten up a little.*

*I was so glad I wore my feather boa.

Anyway, that's my round-up. Several other unexpected excursions yesterday too, involving carnivorous plants, too much J.D. and shaggy-haired left-fielders for the A's, but we'll leave those for another day. The pics here are first of all, a piece from the Westwood exhibit (sweet!), along with a link here if you want to check out the site at the de Young (photo by Nick Knight, 1987). And secondly, a piece from the de Young collection that caught my eye because of its bluesy palette, the implied motion of the wind, and the lightness of the piece. It's Edmund Tarbell, "The Blue Veil," from 1898. Is it me or does that seem ahead of its time somehow?
Labels: art cool progressives fashion