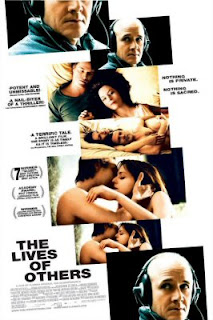 The other night I finally caught "The Lives of Others" (Das Leben der Anderen), which was, of course the Best Foreign Film Oscar winner back in March. It's been playing here in the City since the early part of the year, so I am pretty behind the times in finally catching it, but happily one of the local art houses has been running it since its win. And I've gotta say: wow. I'd heard good things from a few different people, but went in not knowing much else, and that's definitely the way to do it. What you think will be a terse political thriller (set in 1984 East Germany, five years before the fall of the Wall and very much in the old-school GDR grey-green paradigm) turns out to be a poignant rumination on humanity and the arts and fidelity and the compromises we make just to get through.

I don't want to reveal much else plot-wise, but it left me especially mindful of the role of the arts in making (and keeping) us human. The plot spins around a German playwright, sexy in that tousled open-collared spectacle-wearing tweedy sportcoat kind of way, and his actress girlfriend, also beautiful in a brunette Marlene Dietrich kind of melancholy Eastern European way. As the film weaves along we find them in the theater, at a cast party following, playing a sorrowful song on the piano as they mourn the death of a friend, him hard at work writing with colleagues and late-night at his writing desk, etc. And I found all those moments - the creating of art, the life of an artist, the watching the performances onstage and knowing and remembering that crackling feeling - really hitting home with me, reminding me of the way those artistic moments in my own life are what make me feel most human, most real, most alive, as well.

Don't feel like rhapsodizing any more this morning (It's Friday! Memorial Day weekend! Get your drink on!), but just have had the arts spinning in my consciousness a lot in the last week. I think I take it for granted that my family and friends make up such a fuckin incredible arts world, surround me with so many smart and creative and musical and artistic people. And I'm just feeling v. aware of the importance of that right now. Couldn't live without it.

On another note, Macarthur Maze re-opened last night (ahead of schedule), so Bay Area commuters will all be breathing a little more easily this weekend. And I've got Dostoevsky in hand, a quiet morning and a cup of coffee. So cheers to good thick writing and a chilly start to the day and strong coffee. Have a good weekend. And please drink gallons of margaritas.
Labels: art cinema