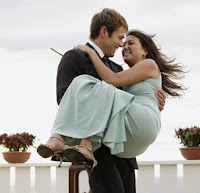 So, this season of The Bachelor finally wrapped up Monday night. Cheesy-but-upright Lt. Baldwin chose the chica we'd called out weeks ago (Tessa), who seemed to be one of the few with a) brains, and b) anything resembling spirit. (She is also, by the way, from San Francisco. Not a coincidence, folks! All the good chicks come to SF - what can I say?). Let the countdown to the inevitable break-up news release begin.

To fill the hollow hole in my heart that's resulted from the closure of this important matchmaking chapter (what will I do with the long empty Monday nights stretching ahead of me??), and to compensate for the soul-sucking vapidity that marked the several hours of life I lost to the Bach's drivel, I've decided to shift gears and dive into a summer romance with Fyodor Dostoevsky. 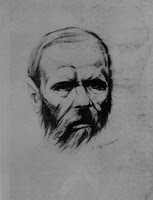 Like Marquez, somehow I managed throughout the course of my higher ed to never read anything by the Russian great. And this seems, well, slightly ridiculous, especially considering that he's known for his thoughts on religion, philosophy, and psychology (hello, my life), as well as his role as a kind of granddaddy to the modern Existentialists like Camus and Kafka (all of whom are, of course, my dears). I've been held rapt by this particular quotation of his scribbled on my wall for six months now: "Much unhappiness has come into the world because of bewilderment and things left unsaid." So it's pretty much ridiculous that I haven't read his shit.

Think I'll begin with Notes from Underground (1864) (and that's not just because there's a cafe a few blocks away by the same name). I might just make it a Russian-themed June and roll into a little Tolstoy after hitting Crime and Punishment and The Brothers Karamazov...we'll see how much gets done...but I'm definitely game for any recommendations. In the meantime, thanks to the wonders of frickin Google, here are some tantalizing little tidbits that make me certain I am definitely going to love this dude:

* "If you wish to glimpse inside a human soul and get to know a man, don't bother analyzing his ways of being silent, of talking, of weeping, of seeing how much he is moved by noble ideas; you will get better results if you just watch him laugh. If he laughs well, he's a good man."

* "We sometimes encounter people, even perfect strangers, who begin to interest us at first sight, somehow suddenly, all at once, before a word has been spoken. "

* "What is hell? I maintain that it is the suffering of being unable to love."

* "For, after all, you do grow up, you do outgrow your ideals, which turn to dust and ashes, which are shattered into fragments; and if you have no other life, you just have to build one up out of these fragments. And all the time your soul is craving and longing for something else. And in vain does the dreamer rummage about in his old dreams, raking them over as though they were a heap of cinders, looking in these cinders for some spark, however tiny, to fan it into a flame so as to warm his chilled blood by it and revive in it all that he held so dear before, all that touched his heart, that made his blood course through his veins, that drew tears from his eyes, and that so splendidly deceived him!"

Anonymous said…
certainly crime and punishment, youll zip through it faster than you might think. i also have turned off the tv and picked up books - why is it such a summer thing to do? i guess because its so awesome to read in the grass or hammock. reading aslam's maps for lovers right now. its good, but i think your russian classic summer sounds like a great idea. enjoy!
May 24, 2007 at 5:19:00 AM PDT