Well, then, now that we've finally resolved the Anna Nicole Smith baby-daddy drama, we can move on to our normal lives again.

Blustery and rainy and cool this morning, and I'm finishing up a little arts and crafts project for a friend (god, that sounds wanky; it's cute, I promise, not as pathetic as it sounds), which means that I've got about 10 minutes to kill while that rubber cement dries and I try to pick the superglue off my fingers. 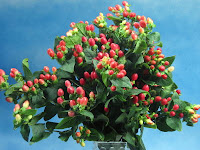 We've got stargazer lilies opening up in the living room right now, and they smell divine. Been buying a ton of my newest favorite flower lately: hypericum. Pictured at left. Kind of a sleeper, slips in there like waxflower or another deep berry-red touch of color, and just brightens everything up in an earthy, warm kind of way. Pretty, isn't it?

So I have now officially hit both the A's and the Giants' stadiums; last night was a chilly game under the stars at McAfee, and holy shit: our team actually WON! Amazing how much more fun it is then. Great 9th inning come-from-behind victory. Our seats were right behind home plate and just four rows up, so as my friend Llama H said, it felt almost like Little League, being so close to the players. But I have to say: what's with the baseball player mullet phenomenon? Ugh, seriously! Cut yer hair, boys. 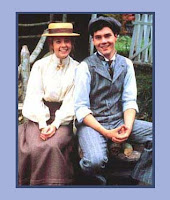 Stumbled across a review for the new Anne of Green Gables musical in the Times the other day, which I've been pretty embarrassingly excited about ever since. Bek and Mari, I know you get me on this, but jesu christe: there are few things I love as much as Anne of Green Gables. Hello, favorite childhood heroine; hello, badass PBS miniseries that we've watched together 16 times, at least; hello, Gilbert Blythe, my beloved and the only man I would rescind my no-marriage-til-everyone-can-marry pledge for. Lucy Maud Montgomery wrote this shit practically a century ago and I'll be damned if her feisty charming smarty-pants little redhead heroine still isn't a proto-feminist icon and just a cool chick. Doubt I'll see this particular version, as it seems pretty oriented toward the family set, but it made me smile nonetheless to know Anne Shirley's still out and about raising hell and reading books in dinghies on lakes playing the Lady of Shalot. Review's here. And while I remain doubtful that anyone can top the Gilbert Blythe of the miniseries we grew up with, I'd be willing to bet this one's worth a look, too.

Bacon Dad said…
It's so not fair that you can do flowery things. I need to COMPLETELY redo my flowerbeds (by the end of last summer, small infants and performances/rehearsals left me little time for care, so they ended up mostly weeds, and did NOT winter well) but it won't stop being FUCKING FORTY DEGREES.