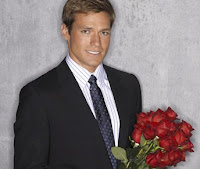 Been a little under the weather the last few days, and so decided to undertake a minor anthropological study as part of my healing regimen. I like to call it "Baching It Up: Hippie Feminist Freak Takes On Scary Mainstream America." I also like to call it "a valid excuse to watch 4+ hours of shit TV." Let's just say it turned out to be an edifying attempt to further prove why TV Turnoff Week is an absolute, absolute necessity for the intellectual future of our youth.

Holy shit. Where do I even begin? So let's just establish that I've always had a fleetingly ironic interest in all things "Bachelor." Ten seasons on (most of which were spent either without a TV or not in the country), I haven't seen most of them, or their spin-offs involving Bachelorettes, but I'll grant a total willingness to read articles and devour media coverage on these hooligans. I am totally fascinated by this bizarro cultural phenomenon. Not only for its grotesque parody of what is supposedly the hetero love and marriage Cinderella myth, but also for the insanely parodic characters we see trotted out each season. It's like the stereotypical fairy tale narrative on steroids, with a lot of bad bleach-jobs, zero IQ, and really expensive dates in exotic locales.

But let's get back to this season. So the gimmick this year is that the dude (hot, naturally) comes from humble beginnings, made a doctor of himself via a career in the Navy, travelled the world doing charity work and winning Ironman triathlons, and now is looking for L-U-V in that most reliable of ways, the carefully orchestrated reality TV hook-up broadcast to millions. I've gotta say, this dude definitely seems like the real deal, in spite of his somewhat wooden personality. He's quite the looker and even throws off some natural charisma here and there. When I get turned off by his sloooowness and military-ness and patriotism I just remember that he was h.s. valedictorian and can run really well without a shirt while tending to small children in Laos, and the conservatism kind of fades into the background. He could be a tooth model, fer sure, if the Naval career doesn't pan out.

Anyway, so the dude seems a little more legit than in past seasons when they trotted out faux princes and slimy wannabe rockers and whatnot. But geez - these "ladies." And yes, I consciously say "ladies" because you will note that not once are any of these twenty-somethings with graduate degrees and professional jobs ever called anything but "girls" or "ladies." And these supposed high-achievers are OHMYGOD so stupid. If these bimbos can be attorneys and "organ donor coordinators" (yes, that's what one is), well then, oh dear, I am concerned. And this show, I've gotta say, is exactly why I still fall back on the "F" word ("feminist") in describing myself, in spite of personally tiring of a lot of the old school 1985 McKinnon/Dworkin overboard stuff re: patriarchy and heterosexual sex equalling rape and all that stuff. As much as I've moved more to the post-feminist side of things in the last five years especially (lipstick can be good! porn stars aren't necessarily exploited all the time! men rock!), boy, when I see these "ladies" on TV, does it reaffirm my certainty that there is a goddamn NEED for feminism because these chicas think that being a woman equals talking in fake high-pitched voices and constantly adjusting their dresses awkwardly and giggling like junior high girls who don't want to get their hair wet when they swim (yes, it happened; see Episode 2). And they are SOOO catty and insecure and disembodied: it makes me wanna cry to see how none of these young women look at all comfortable in their skins - they are so closed-up and frightened looking and nervous and insecure and awkward, it's unbelievable.

And of course there are the obvious factors, too, like how white the standard of beauty is (the only black woman was voted off on the first episode), how cookie-cutter Barbie they all dress and look, and how traditional the gender roles are in the whole thing (e.g. The Bach does all the acting and they are totally passive....waiting to be "chosen"...no agency whatsoever...because he's got it all). Those are so apparent they don't even need to be over-discussed. And don't even get me started on the sexual double-standard, either. And then there's poor little Bachelor Man just watching these girls go at it like predators in search of prey. Ay yi yi. Seriously Paleolithic gender roles at play here.

All I can say is, this show reminds me we need feminism not so much to knock Mr. Bach off his pedestal (because he does seem like kind of a cool and accomplished guy), but to teach these chicas that it's hotter to have an opinion, a personality, goals, and an individual sense of style than to be vapid, giggly, insecure and generic. Ladies! Be your own! Mr. Bach will find you so much more interesting if you're not afraid to get your hair wet. And even if he doesn't, maybe you'll hook up with the cameraman and have cool artistic babies. Or maybe you'll just run off into the sunset with one of the other spurned ladies. Whatevs. Just be interesting. Get some personalities. And lose the cattiness and insecurity.

I know it's a caricature and that's part of the whole point of the series, but geez...little girls (and boys, for that matter) watch this shit and think it's how real grown-up men and women behave. And oh GOD if that isn't tragic! (And PS - they're ALWAYS drinking - you'll note this. Of course the TV gets better when you've got the main players well-lubricated, but really, I cannot believe the alcohol consumption...watch and you'll notice that they always have a drink in their hands.)

I'll be watching with interest in the weeks to come. Kind of like rubbernecking as you drive by a crash on the interstate, but if nothing else, it's a great reminder to get out of the tanning beds and into the library. Or the climbing wall. Or SOMETHING that's real.

Anonymous said…
UMMM-ok, confession. I also watched all of the episodes back to back in some freakish out of body experience last week. What the???? For some reason, I just had to see what it was all about. Nothing good, that's for sure. And I will say that the Bach seems like a relatively normal and achieved guy except that you can see why he has to go on the show to get a girlfriend because he is soooo awkward and says the corniest things. But the "girls" make me want to puke, the whole show makes me want to slit my wrists. But I have to confess that I will prob watch it again...pathetic but true. Cheers to that (I also have noted the enormous amounts of alcohol involved. I am all for imbibing but what are the future husband and wife going to do once they are married...and SOBER???)
April 24, 2007 at 7:00:00 PM PDT