Time for another subversive holiday brought to you by the badass folks over at Adbusters...

TV TURNOFF WEEK starts on Monday! So prime your power buttons and start filling up yer calendars, because this week is going to be so full of crazy fabulous get-dirty living that you won't know what to do with yourselves. The basics:

April 23rd-29th, turn it all off: TVs, laptops, iPods, PDAs, whatever. Unplug. Slow the constant whirr of brain-numbing corporate mental colonization and live in the real world for a week. (And let's be honest - you know you're gonna TiVo it all anyway, so what's the problem, really?)

Here's what Adbusters has to say about it:

"For most participants, the goal of TV Turnoff Week is simply to shake up routines and to get people questioning the massive role of TV and other entertainment technologies in their lives. In light of estimates that children in many developed nations average between 4 to 5 hours per day of screen-time, teachers and parents concerned about school performance and skyrocketing childhood obesity rates have proven to be some of the most enthusiastic supporters of the week-long challenge. 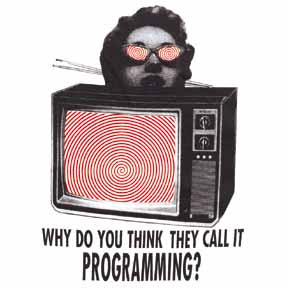 Other participants see the popularity of TV Turnoff Week as the tip of the iceburg in a growing media democracy movement. Adbusters has been instrumental in turning TV Turnoff Week into an international statement of resistance against media concentration and commercialization. Kalle Lasn, the editor-in-chief of Adbusters, argues that “just like our oceans and air, our shared mindscape is also littered with pollutants – manipulative ads, gratuitous violence, bogus eroticism, and distorted news. TV Turnoff Week is about cleaning up that mindscape.”

So make this your first mental clutter-free week. Even if it means just putting your iPod in a drawer for a few days and cutting down to 10 minutes a day online, if you can't seal the deal completely. Enjoy the silence. Get outside. Play an instrument. Unplug yourself.

Press Kit, downloads and more info here. Make sure you check out the brilliant "uncommercials" they've got, too.